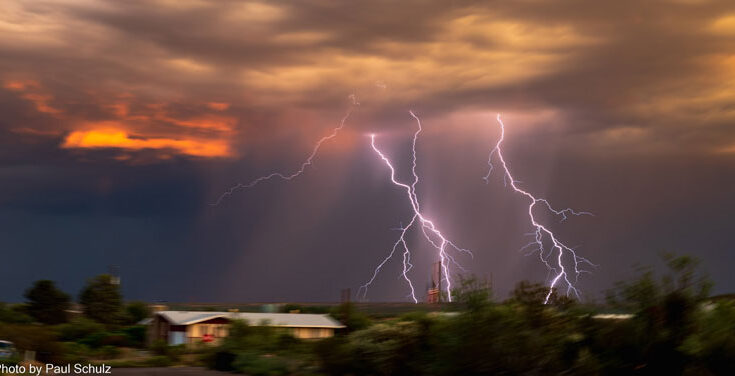 Photo Courtesy Paul Schulz: Lightning crashes in the distance prior to the rain from Monday night’s storm. Sandbags to help with potential flooding issues are available for free to the public.

SAFFORD – With monsoon rains causing localized flooding and more rain in the forecast, the city of Safford is providing sand and sandbags free for the public.

The town of Thatcher is also allowing anyone who needs sandbags to take five and fill them at the town’s Public Works Yard on Reay Lane anytime. If a situation is more serious more sandbags can be taken.

Graham County already previously announced the availability of sandbags for the public at the Graham County Fairgrounds at 527 E. Armory Rd.

The Morenci/Clifton area saw a significant monsoon storm and Duncan and the Gila Valley received a good amount of rain late Monday night.

According to the Arizona Meteorological Network east of Safford, the area received .20 of an inch of rain on Sunday and .81 of an inch on Monday to bring the total for the year to 3.67 inches. So far this monsoon, the station has measured just more than 2 inches of rain since June 24.