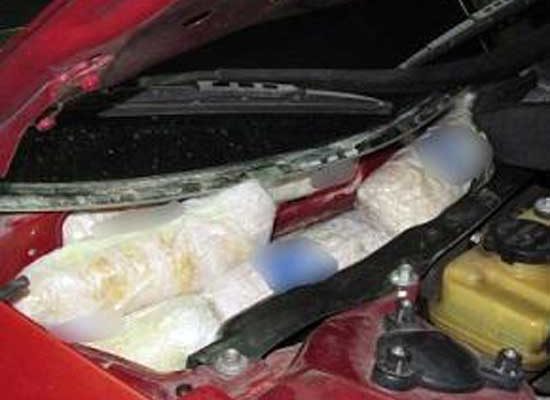 Contributed Photo/Courtesy Border Patrol: Officers remove packages of meth from the cowling of a smuggling vehicle. A total of nearly 90 pounds was seized.

TUCSON – U.S. Customs and Border Protection officers arrested a U.S. citizen in connection to a failed smuggling attempt Thursday resulting in the seizure of nearly 90 pounds of methamphetamine at Arizona’s Port of San Luis.

Officers referred a 36-year-old woman for additional questioning as she attempted to enter the U.S. from Mexico Sunday night in her Mazda sedan.

After an alert to the presence of what it is trained to detect by a CBP canine, officers discovered multiple packages of meth within the vehicle’s doors and quarter panels of nearly 90 pounds, worth $269,000 wholesale at the border and up to $4.5 million after being distributed on the street.

CBP officers seized the drugs and vehicle, and the subject was arrested and turned over to U.S. Immigration and Customs Enforcement’s Homeland Security Investigations.