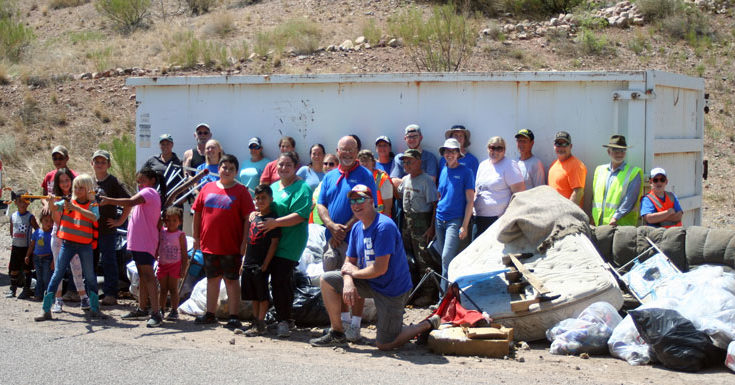 CLIFTON – It is undoubtedly beautiful. The San Francisco River is also one of the eight fastest running rivers in North America. It is one of few American rivers that remain undammed. However, it is considered an “impaired waterway.”

That is a result of E. Coli that is in the river. It has been found that human feces, not the waste from cattle, is the primary cause of E. Coli’s existence. There is also the matter of trash and other litter being left on the river’s banks. Removing it was the main purpose of a Gila Watershed Partner project held Saturday, Sept. 7 in North Clifton and upstream for about six miles.

The trash collected amounted to 620 pounds. It was done by 35 people, most of whom were volunteers. That included six GWP staff members. Ah, but there was more. Also removed from the river banks were a couch, a recliner chair, a mattress, and an awning.

The cleanup, headquartered at a ramada in the North Clifton RV Park, began at 8 a.m. before the sun beat down and made it a very hot morning. As noon approached, cleanup crews began returning to the ramada. All were undoubtedly grateful for the shade and bottles of ice-cold water.

There, some much-appreciated sandwiches were enjoyed by all.  Adults comprised a majority of the crew, but there were also several children who enthusiastically pitched in for the cleanup. Their presence and efforts fall into line with comments from GWP’s Melanie Tluckez.

She said continuing education on preserving and protecting natural sources, such as the San Francisco, is very important. Her daughter, Amelia, along with Julie Mutab, Kayleigh LInden, and other youths involved with the Greenlee County 4-H Club, were among those braving the heat to help make the event a success. There were also several boys working hard in picking up trash. The girls ate lunch in the shade of the ramada while some of the boys at in the sun on a stone wall high above the river. For all of their work, neither the girls or boys appeared as exhausted as many of the adults. All of the children appeared chipper and were talkative.

One parent said, “Yeah, wait until they get home. It’ll probably an early bedtime for most, if not all, of them. We won’t have to remind them it’s bedtime.”

Overseeing it all, despite the effort in such hot weather, was Tim Linden, who is president of the SEACAB board of directors. The acronym stands for Southeastern Arizona Clean and Beautiful. Linden is a longtime board member as is Phil Ronnerud, who participated in the cleanup. He is Greenlee County’s longtime engineer and SEACAB board member.

Linden said, “If you can get people to care enough (about protecting and keeping natural resources clean), that is major. It’s important to get a majority of people to care even a little bit.” He said of the river cleanup that “In its own way this is a major event.”

The North Clifton RV Park is situated where homes once existed prior to the Great Flood of Oct.1, 1983. At the flood’s height, the river ran at an incredible 90,000 cubic feet per second.

North Clifton was a vibrant part of the Clifton community until the flood. Many, but not all of the North Clifton homes were badly damaged or destroyed. However, any and all homes or other structures located in the FEMA-determined floodplain were ordered to be demolished. Even those residents whose homes were considered repairable were forced to leave. In recent years, a restroom was built in what was formerly Paterson’s Addition. It is located where the Agapito home formerly existed.

The purpose of the restroom was to encourage people to use it rather than discharge bodily waste along river banks. It would hopefully take care of, or at least decrease, human waste along the river and lower the E. Coli level in the river so it could be taken of the “impaired” list.

The existence of the restroom apparently has not made much, if any, difference in human waste entering the river. The GWP’s Tluczek said cleanup personnel found several places “or small “pits” into which human waste had been discharged.

“Hopefully, by continuing an education campaign, that will encourage people to use the restroom,” she said. Tluczek added that by making people aware of all the trash being thrown on river banks, that, too, will go far toward the protection of the rich resource of the San Francisco River.