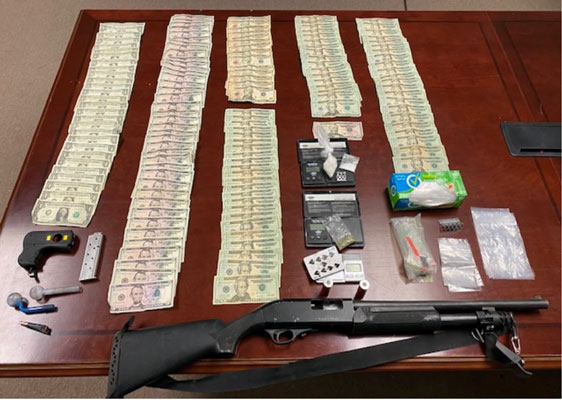 SAN CARLOS APACHE RESERVATION – On Saturday, the San Carlos Apache Police Department (SCAPD) announced the arrest of two members of the Tribe this week for possession with intent to sell and distribute 97.7 grams of methamphetamine. The seizure was part of a two-day operation that also netted assorted paraphernalia, two cases of alcohol, $2,235 in cash, four firearms, two recovered stolen vehicles, service of five tribal warrants, and a search warrant on a house.

Separately, the Tribe announced that the San Carlos Council, the Tribe’s governing body, enacted mandatory minimum cash bonds for those arrested with intent to distribute and sell dangerous drugs.

“Thanks to SCAPD, our streets are safer and a significant amount of meth has been taken off the street,” San Carlos Apache Tribe Chairman Terry Rambler said. “Meth has been crippling and killing our members for too long. It is ironic that members of our own Tribe are part of the problem of addiction. Bootleggers and drug pushers prevent Apaches from realizing the greater power of our language, our culture, and traditions. Addiction takes money, property, and lives. As a people, we need to band together and shed the shackles of addiction. Thanks to the efforts of SCAPD two more links in the chain of addiction have been broken.”

“These arrests were the result of an investigation by the SCAPD’s Community Action Team, a special unit of SCAPD officers tasked with gang and drug interdiction, intelligence, and fugitive apprehension,” SCAPD Chief Alejandro Benally Sr. said. “We also had assistance from the Bureau of Indian Affairs Drug Unit for potential federal charges and the Gila County Sheriff’s Office for any potential state charges. With our partners, we are cleaning up our Reservation. Be warned – if you do the crime, we will find you, and you will do the time.”

On Tuesday, May 4, 2021, the San Carlos Council enacted a new mandatory minimum $5,000 cash bond requirement for those arrested for sale, production, and possession of manufacturing equipment, manufacturing, or involving or using minors. San Carlos Council Member Allred Pike, Jr., who chairs the Council’s Law & Order Committee said, “Dealers are like murderers – their drugs are slowly killing our people, and our Tribe. Previously, dealers would sign a signature bond or get released on their own recognizance. Now, this new law makes it harder for dealers to get out of jail after their arrest.”

“This bond is a regulatory and not a punitive measure,” said Chief Prosecutor Charlene Laplante, Assistant Attorney General for the Tribe’s Department of Justice Criminal Division. “The mandatory minimum is a condition of pre-trial release enacted to facilitate the appearance of the defendant for trial, protect the community, and provides a mechanism for release from jail pending trial. When evaluating bond consideration is given to the nature and circumstances of the offense charged; the history and characteristics of the accused; and the seriousness of the danger to the community.”

Section 12.21 of the Tribe’s Substance Abuse Control Act (SACA) previously required that “[a] bond may not be set less than $5,000 when a Judge issues a bond for a person arrested for an Included Offense.” Section 12.21 now requires that “the minimum bond to be set for a person arrested on an included offense(s) involving possession for sale, production, possession of manufacturing equipment, manufacturing, or involving or using minors shall be no less than $5,000 cash-only bond.”

SACA requires that all persons convicted of these drug-related offenses shall serve a mandatory six months in jail, complete 500 hours of community service, pay a $5,000 fine to the Tribe, issue a public apology, and be removed and excluded from living on or entering the Reservation for a period of six months following completion of their jail sentence. In addition, persons convicted of a second offense shall be ineligible to receive any benefits from the Tribe, including general assistance, housing, scholarships, and fishing and hunting permits. Persons convicted of a third offense shall be disenrolled from the Tribe. Non-tribal members shall be permanently excluded from the Reservation.