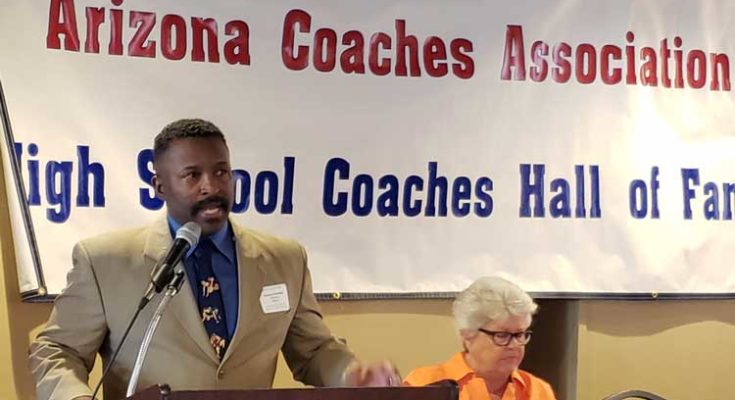 PHOENIX – Safford’s legendary wrestling coach Herman Andrews Jr. can add another notch into his award-winning career as he was inducted into the Arizona High School Coaches Hall of Fame on Sunday.

With the induction, Andrews Jr. and his father, Herman “BB” Andrews, became just the second father/son duo inducted into the Arizona High School Coaches Hall of Fame. BB Andrews was inducted in 2004 for his storied career as the Safford track and field coach, in which Andrews Jr. also serves as an assistant coach. Andrews Jr. also coaches club wrestling and takes wrestlers to junior nationals every year.

Individual wrestling honors for those he has coached include 39 individual state championships (four by his son, Trey Andrews, another two by another son, Tyrell Andrews, and, most recently, two by Pima’s Ryne Lewis, all who were on hand for the ceremony), 22 individual runners-up, and 126 individual region titles. He has coached 16 high school All-Americans, one NCAA Division 1 All-American, two NAIA National Champions, and one NJCAA All-American.

Andrews Jr. said he wouldn’t have had these accomplishments without having a great supporting cast around him, including his assistant wrestling coaches. He also added that above all the kudos and awards, the best reward is watching his athletes grow and improve.

“I just enjoy watching them change from not knowing anything and being scared, to being dangerous on the mat,” Andrews Jr. said.

Club wrestling goes until the end of July, and Andrews Jr. said he wants to keep coaching until he runs out of competitors who want to be the best. He said he has a group of wrestlers as young as 4-years-old he is looking forward to coaching throughout their careers until they graduate high school, and there are a couple junior high school wrestlers who are making waves at the national level already.

“I just want to thank everybody from Rick Finch, my assistant coach who has helped me build a dynasty – Frank Gutierrez was there; those guys were at the beginning of it. It just carries on. The more you get to know kids, the more you’re able to steer them in the right way . . . I can’t say it enough. You’re supporting cast is what gets you where you are.”