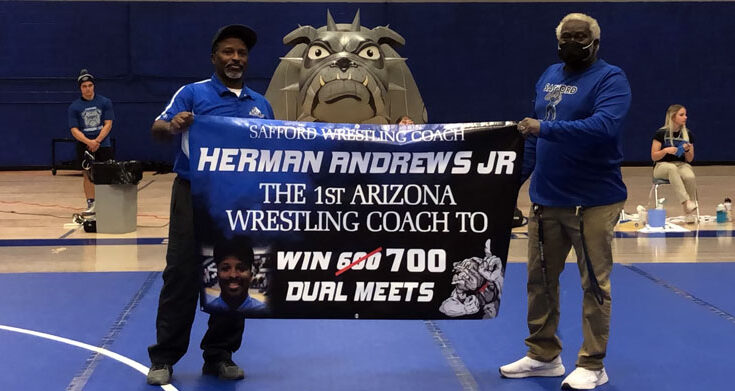 “Yesterday marked a monumental and historical day for Herman and the entire Arizona wrestling community,” Safford Athletic Director Toni Corona told the Gila Herald. “What an amazing honor and feat – And he earned it on our home mat! It was an honor to be part of this special recognition. On behalf of SHS, our community, and the hundreds of student-athletes Herman has influenced over the past 26 years, I say, ‘Thank you and Congratulations.’”

A dual meet is when two teams compete against each other, unlike a tournament where one wrestler competes against other wrestlers from many different teams in a tournament format. In a dual, each team has a wrestler at each weight class to wrestle the other team’s wrestler at the same weight class.

Andrews has 8 team state championships (with six in a row from 2006-10) and has averaged nearly 27 dual wins per year for the last 26 years as Safford’s head wrestling coach, according to Corona.

Humble as ever, Andrews thanked those who helped him achieve the feat and encouraged his team to continue its excellence.

“Thank you for all the support,” Andrews told the Gila Herald. “It’s awesome when all your hard work and dedication to a program pays off. Respect the Bulldogs! We are just getting better (and are a) very young team.”

Safford will next appear on the mat on Jan. 7, 2022, at the 55th annual Peoria Wrestling Invitational in Peoria. Its first opponent will be the Peoria Panthers, starting at 6 a.m.