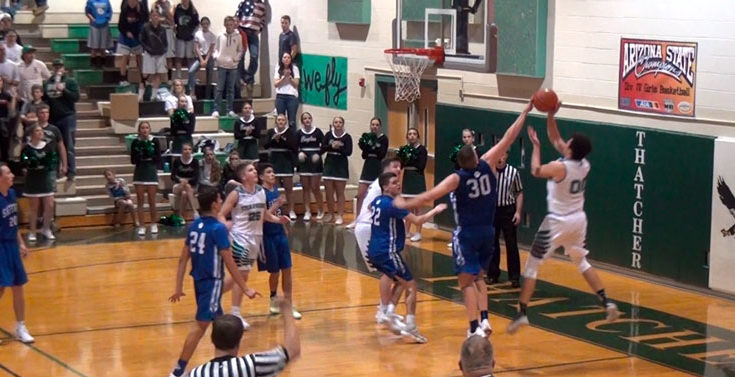 Jon Johnson Photo/Gila Herald: Safford’s Drew Cochran blocks Thatcher’s Cole Motes in the waning minutes of the game. A foul was called on Cochran for hitting with the body previous to the block. Safford emerged from Thatcher with a 65-62 victory.

After being down by as much as 13 points in the third period, Thatcher came back to take the lead by 2 with less than two minutes to play. But Safford dug deep and came out victorious, 65-62 after sophomore Jejdrique Chavez scored on an isolation play and Dom Gutierrez, who finished with 15 points, sealed the victory with two clutch free throws with just seconds left. Thatcher’s Matthew Palmer’s desperation 3-point attempt on the run as time expired fell short, and Safford headed for the short drive home with smiles on their faces.

It was a back-and-forth first period as Thatcher scored just seconds after winning the tip when Rulon White laid it in off glass. Safford answered with Gutierrez getting into the lane and then the Bulldogs went on a 10-2 run as Andrew Smith torched the twine from deep on two 3-pointers. Smith finished the night with a team-best 16 points.

Thatcher big man Cole Motes was indeed big down low all night and snagged numerous rebounds while scoring in multiple fashions. Motes finished with a game-high 25 points and brought Thatcher back on top in the first until his Safford counterpart, Drew Cochran, swished a 3-pointer from the corner to tie the game at 17 after the first period of play.

“These past few days I’ve just tried to get back into it,” Motes said. “I’m still a little sore from the game on Friday . . . We just got to do the little things better, especially me. I could work on a lot of things better for this team and the rest of the season, and I think we’ll be ready the next time we see them.”

Turnovers and long rebounds aided a big second period by Safford, which took off running and opened up a double-digit lead by hitting fast-break buckets on an 8-0 run to open the period. Keegan McKinney helped the cause aided by Trett Wiltbank and Gutierrez, and Safford led 37-26 as the teams broke for halftime.

“We try to create from our defense,” Williams said. “Our goal on defense is to come up with the rock . . . We want the ball.”

Thatcher began to creep back into the game in the third period as Palmer hit Motes on an alley-oop, but Mckinney and Gutierrez had other ideas. By the time Cochran drilled another 3-pointer from the corner, Safford had its biggest lead of the night at 13. The Bulldogs ended the period up 55-43 and feeling confident.

Then White became possessed and suddenly scored at will on three shots and assisted on others, including a 3/4-court pass to Motes, to shrink Safford’s lead to just 2 points.

Smith had enough of that, however, and split the defense and somehow scored a layup over Motes. Wiltbank then gathered a rebound and immediately threw an outlet pass to Smith, who scored the fast-break layup to put Safford back up by 6.

But Thatcher wasn’t done as Palmer hit a 3-pointer and a couple of free throws, then, after Smith hit a free throw, White tied the game up at 60 with a jumper in the lane with about 3 minutes left to play.

Palmer then gathered a loose ball and scored in the paint while being fouled. He missed the free throw but Thatcher was up 62-60 with under 2 minutes left in the game.

After a timeout, Safford isolated Chavez at the top of the key and he blew by White to lay it up off the glass to tie the game.

“He’s the real deal,” Williams said about Chavez. “He’s got a lot of good years in him. He’s a real talented, physical player. I think Thatcher focused on him a lot tonight and tried to take him out of his game and they did all of our guys and they did a good job of it. They didn’t come out like a team that just got here from their football (season) and they’re going to be really rough.”

Chavez then hit a free throw and Gutierrez hit two free throws at the end to give Safford a 3-point lead.

“Thatcher’s a great team,” Chavez said. “They have great defense but we do what we can do. Get to the basket is the main part of my game, but if it’s not there I have a lot of other things I can use too.”

Thatcher couldn’t get a field goal on its last couple of possessions, and Palmer’s desperation running 3-pointer as time ran out missed the mark as Safford left victorious.

“My guys fought hard and I’m proud of them,” Williams said.

Safford will next play Thursday night at home against the Florence Gophers, while Thatcher will host the Morenci Wildcats on Friday night.