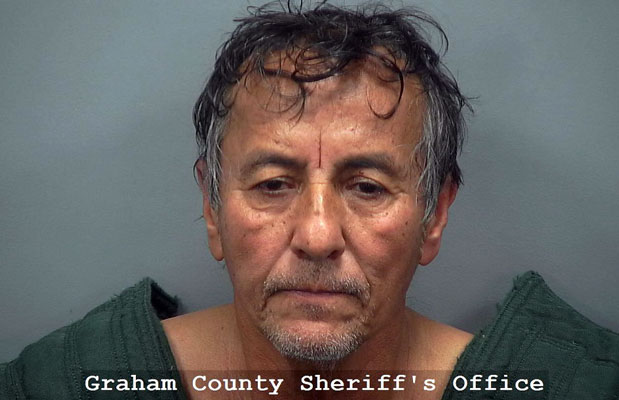 Contributed Photo/Courtesy GCSO: Robert Atencio was sentenced to 45 years in prison after pleading no contest to child sex abuse charges.

SAFFORD – A Safford man will likely spend the rest of his life behind bars after entering into a plea agreement regarding multiple child sex abuse charges. According to prosecutors, the investigation uncovered abuse that stretched two generations and went on for nearly 40 years.

During a hearing on May 26, Graham County Superior Court Judge Travis L. Ragland sentenced Atencio to three consecutive 15-year sentences for a total of 45 years behind bars.

This case first came about because of allegations raised in February of 2020, regarding sexual offenses committed by Atencio over a number of years. When the victim was invited to attend a Super Bowl watch party at the suspect’s house, the victim informed her family of the situation, which led to a law enforcement investigation.

Eventually, the investigation grew to include allegations of numerous sexual offenses committed by the defendant upon three of his family members over a total period approaching 40 years.

“We are very grateful for all those who worked so hard on this case,” said Graham County Attorney L. Scott Bennett. “The Safford Police Department, assigned prosecutor Allan Perkins, and the victims – along with their families – were extremely diligent and committed to the success of this case. We appreciate the sentence imposed by Judge Ragland, and truly hope that this serves as notice that this conduct will not be tolerated by this office or our community.”