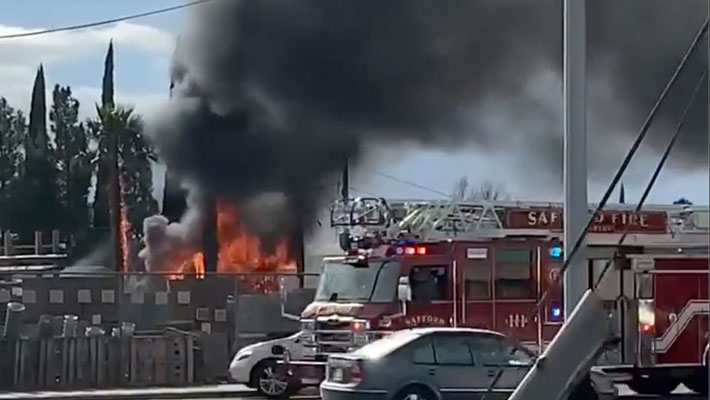 Contributed Photo: The Safford Fire Department quickly responded to a structure fire in Downtown Safford on Wednesday and kept it from spreading to neighboring properties.

SAFFORD – The quick response and action of the volunteer Safford Fire Department knocked down a structure fire that started in the backyard of Rodgers Custom Upholstery/The Rustic Barn Bakery at 724 S. 6th Ave. on Wednesday afternoon. The main building on the property did not suffer any fire damage.

According to Safford Fire Chief Clark Bingham, a crew was dispatched to the structure fire at about 1:45 p.m. and came upon a structure fully engulfed in flames. Bingham said the structure was a playhouse in the backyard.

Firefighters kept the blaze to the playhouse and stopped it from spreading to nearby businesses. Some nearby trees were burned and a utility pole was charred, but a quick stream of water saved the transformer from being destroyed.

“The guys got there quick, laid some lines and went to fighting the fire,” Bingham said.

Wildfire pretty much burned out

A wildfire that caused the temporary closure of the 8th Avenue Bridge on Tuesday has pretty much burned itself out, according to Bingham.

The windswept fire ravaged the brush along the riverbed and took out one utility pole but no other structures were damaged. It crossed the bridge and headed westward toward areas that had previously been burned in other recent wildfires.