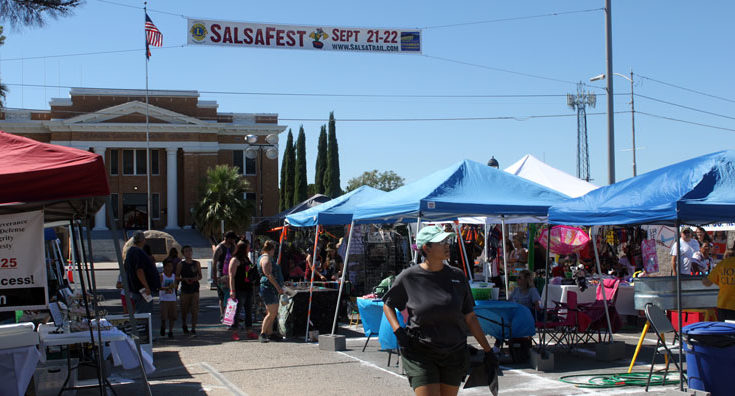 Jon Johnson Photo/Gila Herald: The Safford City Council is mulling over a proposal to create an entertainment district Downtown. The area recently hosted the popular annual SalsaFest, which had a special events permit to serve wine and beer.

SAFFORD – To better promote the Downtown area, the Safford City Council is pondering a suggestion from the Safford Downtown Association to create an entertainment district.

With the entertainment district, the city would then be allowed to approve such a business, even if it was within the 300-foot rule. Each application would be decided on a case-by-case basis with the Safford City Council having the ability to either reject an application or approve and recommend an application to the state liquor board. Currently, the exemptions include restaurants with food sales of at least 40 percent, hotels and motels with a restaurant, special event licenses, golf courses, performing arts theaters with seating for 250 or more, craft distillery, and winery festivals.

At its Monday night work session, the council was informed of the suggestion by city staff member Susan Anderson.

“This entertainment district is purely to provide relief from that 300-foot separation rule,” Anderson said.

Safford Mayor Jason Kouts appeared to be against forming an entertainment district and requested city staff to speak with existing businesses, churches, and schools in the area for their thoughts on the subject. The proposed area currently encompasses Downtown from 8th Avenue to the west just east of Entertainment Avenue to the east, while bordered by 8th Street to the south and farm roads to the north. According to law, the width of an entertainment district must be at least 1/8 of a mile wide.

Kouts questioned how the city would benefit from the district.

“What’s the big benefit to the city? What is your selling point?”

Anderson said the reason would be to allow new businesses such as a micro-brewery or wine tasting facility to open up Downtown where they currently cannot due to the 300-foot restriction. She said she is aware of two such businesses that would like to open up in the area.

Downtown Association President Danny Smith said the association feels that an entertainment district might be helpful to bring more people to the Downtown area and that he knows of one person who wants to open up a brewery.

“We don’t want anyone to be prohibited from doing something,” Smith said. “Nightlife and things going on Downtown are one of our Achilles’ heels.”

Conversely, Willcox has five wine tasting facilities in its Downtown, according to Smith.

Kouts also added that it might be a moot point since there are no available liquor licenses in Graham County. Each county is only allowed so many liquor licenses from the state based on population, and all that have been allocated to Graham County are currently in possession of businesses. That means any new business that would require a liquor license would have to purchase one from an existing holder and have that transfer be approved by the state liquor board.

“You’re not going to be able to get a liquor license unless you go buy somebody’s (who) has one for sale,” Kouts said.

In the end, the council directed city staff to reach out to schools and churches in the area and to gather more information about the subject.

“I would like you to pursue it to get the answers to the questions that we have,” council member Arnold Lopez said.