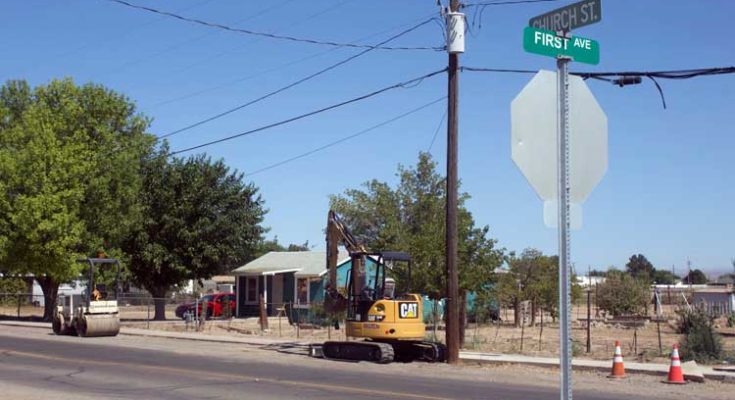 SAFFORD – It looks like the city of Safford will get its water pipe down before the town of Thatcher totally replaces the street.

Coming in more than $100,000 less than its next closest bidder, the Safford City Council unanimously voted to approve CNB Excavating as the contractor for the Church Street Water Main Upgrade Project at $995,000. The project had been budgeted at $1.3 million.

Construction is scheduled to begin in July to take place before the town of Thatcher’s Church Street widening project, which is currently adjusting utility poles to make room for the wider street. The construction estimate to lay down more than one mile of 12-inch diameter pipe and 1,615 feet of 4-, 6-, and 8-inch diameter water mains is roughly six months.

Thatcher is planning on a $2.3 million complete rebuild of Church Street from U.S. Highway 70 to Stadium Avenue that will widen the street and include new sidewalks, curbs and gutters, and new asphalt from curb to curb. The street will also feature parallel parking and bike lanes on both the southern and northern sides.

According to Thatcher Town Engineer and Interim Town Manager Heath Brown, that project will also consist of constructing a roundabout at the intersection of Church Street and Third Avenue. Thatcher previously constructed a roundabout in Daley Estates at the odd intersection of Golf Course Road, Reay Lane, Hoopes Avenue and Robinson Avenue.

Brown said the town plans on starting the street widening project in Spring of 2019. If the water pipe was not put down prior to the new roadway, it would have cost the city of Safford that much more to cut up the new roadway and replace it as good as it was before the installation.

The water main replacement project is possible due to a pending loan from the Water Infrastructure Finance Authority of Arizona (WIFA). A new loan of roughly $4 million will be the first of four funding periods over the next five years to pay for the replacement of 58 miles of major distribution lines. The city will be paying on the new WIFA loans until 2048. The Gila Herald will have a more in-depth article on the new WIFA loans in an upcoming article.

The city previously finished paying off a 1998 WIFA loan and is still paying on a loan approved by the council in April 2008 to complete capital improvements regarding fixing the city’s 10-million-gallon storage tank at Discovery Park, building new concrete tanks with at least a 7-million-gallon capacity, fixing old water pipes and creating a blend line between the Carrasco and Kempton wells. The city won’t finish its debt service on the 2008 WIFA loan until 2028.

To help pay the debt service on the new loans, the Safford City Council approved a 13-percent water rate increase at a meeting in March. The council also approved electric and natural gas rate decreases of 10 percent and 5 percent, respectively. While those utility decreases more than offset the utility increase for Safford residents, it does not assist Thatcher and Graham County water customers who receive natural gas and electricity from other sources than Safford. Additionally, Thatcher pays a 10 percent premium on top of what Safford customers are charged, and customers in the county pay a 25 percent premium.