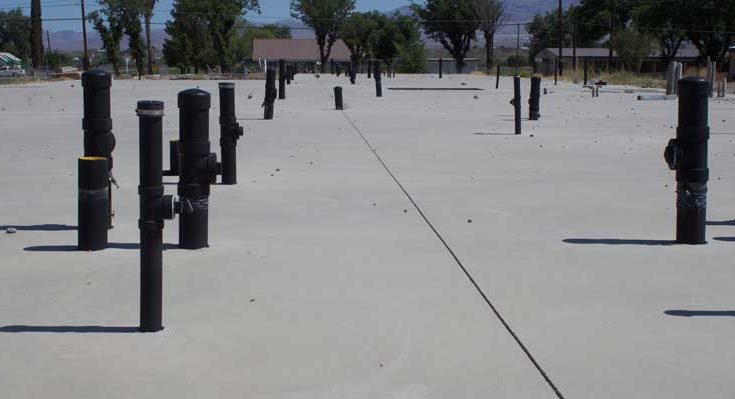 Jon Johnson Photo/Gila Herald: This hotel cement pad that has been dormant for 11 years at the intersection of Central Avenue and U.S. Highway 70 may be developed into an apartment complex.

Paves way for a developer to build apartments with a commercial frontage on U.S. Highway 70 and Central Avenue

SAFFORD – After sitting stagnant for 11 years, the commercial cement pad at the intersection of Central Avenue and 5th Street (U.S. Highway 70) might finally be developed thanks to removing a few words from a deed restriction.

At its Monday night meeting, the Safford City Council unanimously voted to amend a deed restriction on the property by eliminating the phrase “of a hotel”. The property is owned by the Shafford Hotel Group, which sought to build a hotel in early 2007. In February 2007, the city of Safford entered into a land exchange agreement with the Shafford Hotel Group to exchange the city’s 20-foot by 300-foot strip of land fronting Central Avenue for a utility easement alley on the east side of the property and $23,400. When doing so, the city put a deed restriction on the 20-foot strip of land that says the strip could only be used for “parking, canopy, signage or other uses consistent with the development and operation of a hotel . . .”

At the Monday meeting, Safford City Manager Horatio Skeete advised that a developer wants to build an apartment complex on the pad with 35 to 40 apartments and requested the change in the deed restriction so the 20-foot section could be used for parking for the apartments. While the intention to use the land for parking is the same, without the removal of the phrase “of a hotel”, the land could not be used for any other type of parking.

Vice-Mayor Richard Ortega said he was glad someone was looking at developing the pad, which has been fenced off on three sides and sports various weeds and a plethora of broken beer bottles on its northern side, but said he would rather have some sort of commercial retail development than an apartment complex.

“That property is very valuable as far as commercial property along the highway,” Ortega said. “(With) apartments, the city realizes nothing except foot traffic to Main Street. For the city, I’d rather have a little sales tax coming in. I would be very careful to make sure that there is some type of commercial development where we do realize some sales tax.”

Mayor Jason Kouts said he agreed with Ortega to an extent but felt an apartment complex would work very well in that area.

“It would put foot traffic on Main Street, which would help generate sales tax of Main Street,” Kouts said.

Skeete advised that due to its zoning as highway commercial, the frontage of the property facing the highway would have to be some sort of commercial development. He said he has already spoken to the potential developer, who advised the front quarter of the existing pad would be built for a commercial entity with the remaining three-quarters utilized for 35 to 40 apartments.

“That would address Vice Mayor Ortega’s concern that we allow for some commercial activity along the frontage to generate that sales tax while allowing the rest of the property to develop . . .” Skeete said.

Skeete also advised that according to a preliminary plat from the potential developer, the property will have enough parking to meet the city’s requirements if the deed restriction was amended.

The council then unanimously voted to amend the deed restriction so a development other than a hotel could move forward.