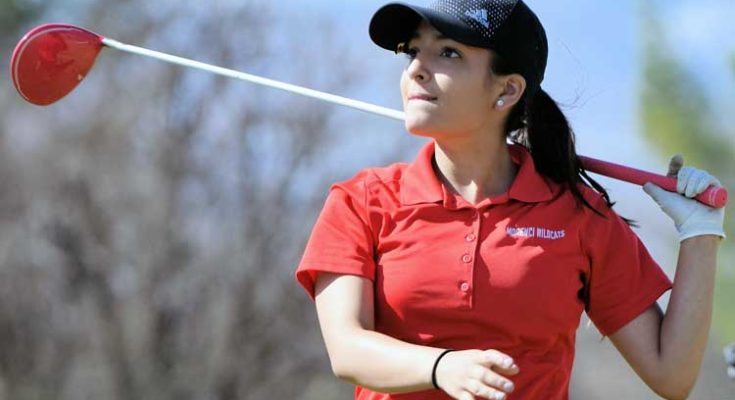 MORENCI – Morenci Class of 2018 member Robert Saenz had fun in Tucson last week, ending in a two-way tie for 65th of 82 finishers at the 2-day Division III state golf meet on the Omni Tucson National course concluding May 9.

The school’s 14th meet, an added May 4 outing in Bisbee, helped cement his state meet participation.

All of his preparation, since first going out for the team as a freshman, was building up to this season. He took advantage of the school’s athletic development class, lifting weights to strengthen his back, legs, and arms, and running to build up his stamina.

“Not all courses allow you to use wheels for your clubs’ bag,” he said, adding, “you do a lot of walking and the clubs are heavy.”

Saenz encourages others to go out for the sport. “Come out and practice, give it your all.”

The soon to be Morenci alumnus is only the second in the eight-year program to qualify for the state meet, behind 3-time qualifier and class of 2015 member Nicholas Austin Saiz.

“We didn’t have enough low scores to qualify as a team,” said first-year head coach David Gonzales. “Saenz was our only qualifier.”

Saenz preceded the state meet with the duel in Bisbee and a May 1 stop in Safford.

Morenci also came in second to the host in Safford, totaling 200 with Saenz carding a 45, Wirkus 47, Delgado 48, and both DeJesus and McCarthy 55.

Inconsistency plagued Morenci golfers, ending with seven different foursomes in seven April and two May outings totaling 99 holes. Of the five representing the school in the season opener, Saenz and senior Jude Perez along with Delgado, junior Maya Martinez, and Wirkus, only Saenz and Delgado did so in all seven April meets plus in both May meets.

Three others, senior Illeana DeJesus attended all seven April meets and both May meets but helped score team points in seven, averaging 47.5 (475); senior Matthew McCarthy was in the top four thrice with a 50; and junior Thomas Hollestelle stepped on the course once, coming in fifth with a 72.

Martinez made the cut once with a 57, and both Perez and senior Jaime Salazar were fifth with 64 and 61, respectively.

However, the above averages are not based on the formula used to determine the iWR (iWanamaker Rating) based on the USGA handicapping system.

Others out for the team were junior Christian Alva, sophomore Matthew Zumwalt, and freshman Richard Valenzuela.