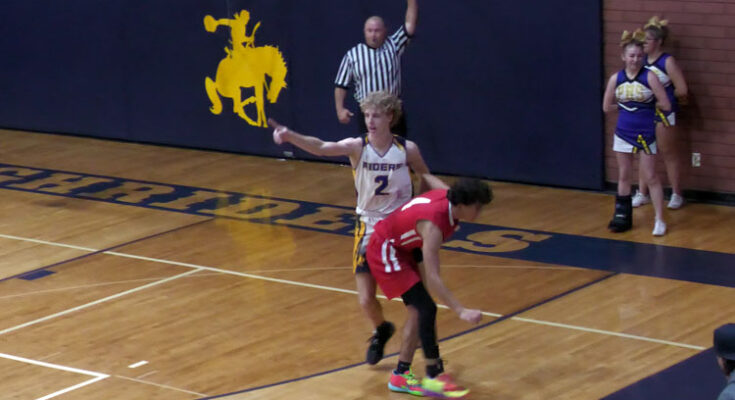 Jon Johnson Photo/Gila Herald: Grant Ashby points possession to Pima during its 65-51 victory over Bisbee on Friday night. Grant had a game-high 28 points in the victory.

It was the 3-ball that gave Bisbee its lead and keep it in the game. Bisbee hit 11 3-pointers on the night coupled with only 4 2-point field goals and 10-15 from the free throw line.

Nobody was better at it in the first period than Bisbee’s David Zamudio, who nailed three of his five 3-pointers for the game in the opening period, often with defenders in good position. Ramon Loya (5 points) also hit a 3 in the opening period to help propel Bisbee to a 16-9 lead at the end of the first.

The opening quarter also saw the return of seniors Leland Thompson and Seth Russell, who had been sidelined since the start of the season with injuries sustained during their championship football run.

Russell banged around down low and made his presence felt. He ended up going 3-6 on the night for 9 points and 4 rebounds.

“They came off the bench tonight,” coach Thompson said. “They have a little rust. They look like the football players when we played Arizona Lutheran. They’re a little rusty but, you know, both of those guys bring something to our team that we need.”

Pima fought back in the second period behind good defense and second-chance shots. With about 3:05 left in the second, Wyatt Wiltbank dove for a loose ball and tossed a no-look pass over his head to Coy Miller, who took it for a layup to tie the game up at 19-19 to the joy of the crowd.

Zamudio came right back with a dagger from deep to retake the lead. With just about a minute left, Keegan Corona picked Ramon Loya’s pocket and found Grant Ashby for the fast-break bucket to tie the game at 23-23. However, Jose Mendez got the blocking call on a drive to the basket and the bucket. His subsequent free throw gave Bisbee a 26-23 lead at the half.

But Grant Ashby wouldn’t allow Bisbee to pull away and instead reeled them in with 13 of his game-high 28 points in the third quarter. Grant (12-22, 2-2 free throws) hit a jumper from the baseline to open the quarter and was the recipient of fast-break opportunities from turnovers or just quick outlets from missed shots.

“We knew they were a good 3-point shooting team, so we just had to play up,” Grant said. “They got a lot of 3’s on us because they are a pretty good shooting team but we just worked hard and played aggressively and we just came out with the win.”

Jose Mendez hit the second of his four 3-pointers on the night on his way to a team-high 19 points to retake the lead, but Grant came right back with a 3-pointer of his own with about 6 minutes left in the third to give Pima the 30-29 edge.

“In the second half we started getting better looks and Grant kind of went off a little bit – and other guys cutting to the basket we hit them for layups.”

While Bisbee battled back with a 3 by Zamudio, Pima countered with Russell down low off an assist from Corona and a fast-break layup from Grant on the assist from Thompson. A couple of free throws later and Pima has its first lead at a break, up 40-38 at the end of the third.

The fourth period belonged to the Roughriders, with Grant starting it up with a 3 to extend the lead. A good defensive play by Thompson lead to an offensive foul call and turnover that ignited the crowd.

“We did a better job being disciplined on defense,” coach Thompson said. “They still hit some really long 3’s that were contested. If they do that, that’s fine, but there were six or seven that were wide open – we gotta get rid of that. completely.”

Bisbee then lost Garrett Curtis on an inbounds play and the sly senior easily hit the shot. Curtis was also the recipient of a nice assist from Corona, who dribbled through a double team to find him.

Curtis hit 8 of his 14 points (7-9)in the final period and had a steal and score late in the fourth. He also hauled down 7 rebounds, had 2 steals, and 2 recoveries.

Pierce Ashby was a beast down low the entire game, deterring anything that came within his sphere of influence, and ended up with 4 recorded blocks.

One of his most impressive went down as a foul, however, as he pinned the ball excellently against the backboard in a most demoralizing way. Pierce also finished up with 6 points on 3-4 shooting and had 10 rebounds and 5 recoveries.

Also scoring for Pima were Wyatt Wiltbank and Coy Miller with 4 points each.

The Pima Roughriders are playing in the Visit Mesa Basketball Challenge against much larger schools, including some out-of-state.

In the first game Monday night, Pima fell to 6A Rock Canyon out of Colorado, 36-54.

The Roughriders will next battle 5A powerhouse Campo Verde, who opened the tournament by defeating Patrick Henry, 57-39. Pima will finish the tournament with a fourth game against an opponent TBA.

“It should be a real growing experience for us and kind of a measuring stick for us to see where we’re at,” coach Thompson said.

Thatcher defeated Globe 51-44 in the first game of the 2nd annual Eddie Martinez Invitational in Florence on Monday, Dec. 19. The Eagles then lost a close one in the second game of the day, 44-49, to the San Tan Foothills Sabercats.

The Wildkats (2-3 conference, 4-5 overall) will next play in the 59th annual Boys’ Eastern Arizona Holiday Tournament at EAC, starting on Dec. 27.

Morenci beat Tombstone 58-47 on Dec. 17 and then fell to Sahuarita 50-62 that evening in the Benson Holiday Tournament. The Wildcats (3-1 conference, 8-5 overall)will next play in the 59th annual Boys’ Eastern Arizona Holiday Tournament at EAC, starting on Dec. 27.