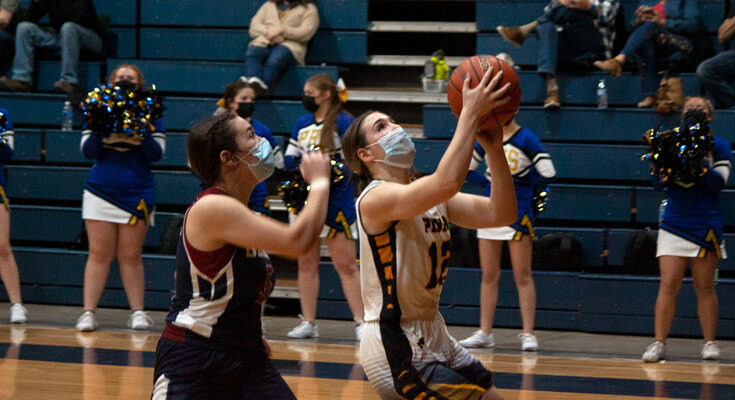 Jon Johnson Photo/Gila Herald: Pima’s Nevaeh Grant scores a bucket over a Benson defender as the Roughriders defeated the Bobcats on Friday, 62-42.

PIMA – For the second game in a row, the Pima varsity girls basketball team opened up a big halftime lead over its opponent en route to victory.

The girls never let up their relentless defensive pressure and fast-break offense, leading to a 31-15 halftime score and 62-42 final.

Head coach Roy Corona said the game was a battle but his team showed its mettle.

“Our defense is awesome,” he said. “The last two games we played good on defense. That’s the way I want to play. I want them to get after it every minute. If they can get that, we’ll be alright.”

Four Roughriders scored in double figures, including Sam Piippo with a game-high 15, followed by Saydee Allred with 12, Ashlynn Chlarson with 11, and Nevaeh Grant with 10.

Twins Ashlie and Aubrie Sherwood also poured in 6 points each, and Jayci McClain finished the scoring with 2 on the night.

For Benson, Emily Darwin led the way with 13 points, followed by Ally Jennings with 10.

“They came out and played hard on us,” Corona said. “We missed a lot of layups. I think if we had made those layups we’d be up more, but hey, they’re a good team.”

Junior Maya Mattice left the game in the first period due to injury.

The Pima Roughriders (1-0 conference, 2-0 overall) will next host the St. Johns Redskins (2-0 overall) on Tuesday, Jan. 26, starting at 5:30 p.m. The game will be the region opener for both teams, and with both bringing current unbeaten records into the match, it will give the victor the early driving seat at the top of the region.

In other girls hoops action:

For mobile users, swipe left to scroll through the pictures in the slideshow.