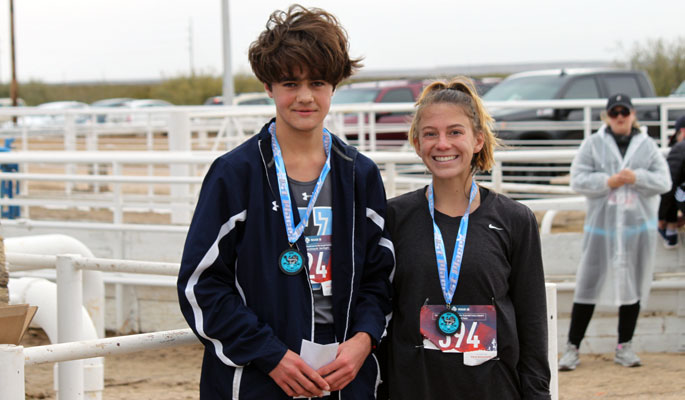 PIMA – Chilly temperatures, wind, and rain couldn’t dampen the spirits of the numerous families who took part in the 14th annual Pima Turkey Trot on Thursday.

The event, a 5K and 1-mile fun run co-founded by Cody Marshall and Melinda Nelson in 2006, has become a rite of passage as part of numerous families’ Thanksgiving tradition. This year, 778 runners registered but only 383 finished the race, according to race records.

“I’m just glad people came,” Nelson said. “Last night, I was packing up and thought ‘we’ll see who comes’, but we had a great turnout . . . It’s still a great Thanksgiving day with snow on our mountain. We’ve got lots of good help out here and we hope it all goes well while they are out there running.”

The event is a fundraiser and the proceeds are donated to Pima Schools in some aspect of physical fitness. The race has raised more than $80,000 for that purpose over its lifetime.

The deluge that transformed the original course into a muddy mess cleared up right before race time for the 1-mile fun run and 5K event. While the wind continued to howl, the event remained dry until the last bit of evidence of the day was packed up and put away.

Emcee Troy Judd kept the mood lighthearted as the nearly 400 racers for the 5K set up to run the altered racecourse down Cottonwood Wash Road, which is a paved road. Normally, the course goes over dirt and paved roads and then into a cross-country path for the 3.1-mile distance, but due to the heavy rains and muddy course, the route was changed to a there-and-back course along the paved road.

The result was race records in both the overall male and female categories that blew away the previous records.

Jonathan Barney, 15, of Scottsdale finished in fourth place last year behind his brother, Michael Barney, then 19, who set the course record at 16:24.09 in 2018. On Tuesday, Jonathan blew that record away by finishing first in a time of 16:01.61.

“It was good,” Jonathan said. “It was nice and cool out. The wind was a little bit annoying, but it was good . . . I like that it was on a road instead of the muddy fields.”

Jonathan is a sophomore who runs cross country for Veritas Prep. He was in town visiting his large contingent of family who reside in the Gila Valley.

Hot on Jonathan’s tail was Jacob Urrea, of Safford, who finished in 16:03.79, and Jordan Morales, of Morenci, finished more than a minute behind to take third place at 17:05.37.

On the female side, Paige Morales, 20, of Morenci repeated as champion from last year and knocked off more than 43 seconds from her 2018 first-place finish as she zoomed in with a time of 19:16.59.

Morales, who currently attends Adam State University, was back in town visiting family for the holiday. She said the Pima Turkey Trot is a tradition for her family to take part in prior to the Thanksgiving feast.

“I just think it’s a good sport and a great cause,” she said. “We love giving back to Pima. We think it’s a great thing to have and the (inaudible) going in is just having a good workout so we can eat after.”

Morales held off Meghan Barney, of Scottsdale, who finished in second place with a time of 19:46.81, and Jordyn Carter, of Gilbert, who finished third in 21:08.99.

In addition to medals for the overall male and female finishers and top three finishers in each age bracket for males and females, the event also featured a raffle with numerous sponsor goodies and a turkey was given to the Smith family for having the most participants with 26.

Click here to view the Gila Herald’s photo album of the race.

Visit pimaturkeytrot.com for a list of all the winners and more race photos.