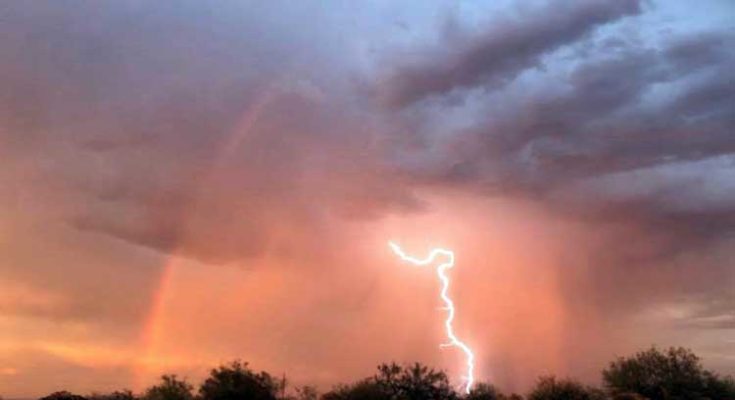 Contributed Photo/Courtesy Joni Kennedy: Reader Joni Kennedy snapped this pic that captured lightning, a rainbow, and the sunset all in one shot. The rain that fell Friday was soaked up by the parched desert.

GRAHAM COUNTY – The start of the monsoon season is upon the Gila Valley, and the parched desert received a respite from the hot, dry conditions Friday.

A slow-moving storm front moved up from the south to the northeast, dropping rain in Graham County for roughly three hours during the afternoon and then passing more into the later evening.

While the Arizona Meteorological Network’s Safford station only measured .19 of an inch, several other local rain gauges in Thatcher and Safford showed much more. To date, the station has measured 2.26 inches of precipitation, which is ahead of the 1.15 inches measured to date at the same place last year. The monsoon dropped a few inches last year, with 4.45 inches measured between July 9 and Aug. 12 alone. The area didn’t receive that much the rest of the year, however, and finished with just 5.85 inches compared to 13.18 inches in 2016 and 13.71 inches in 2015. Those two years were anomalies as the area usually receives about 8 inches of rain per year.

While the forecast for Saturday is sunny and warm, experts are predicting a wet monsoon season for southeastern Arizona.