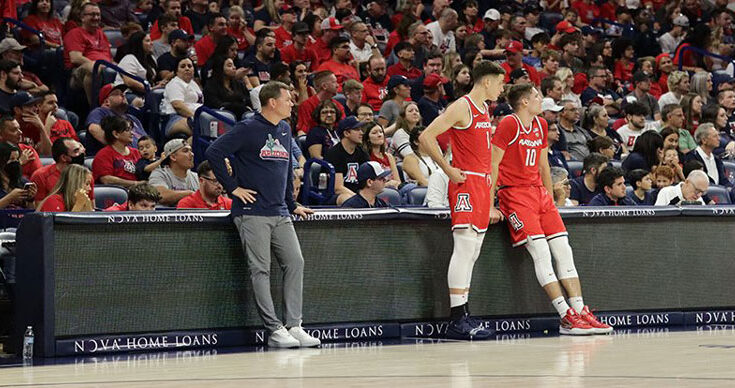 Photo by Ryan Meza/Cronkite News: Second-year coach Tommy Lloyd, left, is clearly enjoying his experience at Tucson and is grateful that former players remain connected. “The longer I’m here, the more I love it,” Lloyd said.

TUCSON – Arizona men’s basketball coach Tommy Lloyd gave a sellout crowd at McKale Center its first look at a remastered Wildcats roster along with a glimpse into the program’s storied past during Arizona’s annual First Watch Red-Blue Game on alumni weekend.

The Wildcats, who lost three players to the 2022 NBA Draft, rocked new uniforms that are a throwback to 1987-88, paying homage to the program’s first Final Four team that included NBA standouts Steve Kerr, Sean Elliott, and Tom Tolbert.

“There’s a pride in wearing an Arizona uniform, especially (when it is from) back in the day,” said junior center Oumar Ballo. “Guys like Steve Kerr really set the tone for us, so we’re just proud to get a throwback jersey.”

Lloyd, who was named the 2022 AP Coach of the Year in his first season with Arizona, welcomed nine newcomers to the court for the intrasquad scrimmage, highlighted by a couple of graduate transfers.

Guard Courtney Ramey, who played at Texas last season, and wing Cedric Henderson Jr., who transferred from Campbell University in North Carolina joined four freshmen newcomers, all either from Arizona or Europe.

Freshman Henri Veesaar, a 7-footer from Estonia, stole the show during the game with 16 points on 7-of-11 shooting.

“I think that Henri is going to have a real impact on this team,” Lloyd said following the game. “I mean, you look at a kid that I think is going to be able to throw in some 3s here and there. He’s quick-twitch. He’s got a great second jump. He can catch lobs. You know, he’s got a high IQ.

“He’s just going to have to learn how to tighten some things up and just physically develop a little bit and get some experience.”

Veesaar, who most recently played in the youth program of Spanish professional club Real Madrid, showcased his ability to create shots from inside and outside throughout the game as Arizona looks to expand its arsenal of frontcourt players following the departure of Christian Koloko, who was a second-round pick of the Toronto Raptors in June.

Lloyd said that he likes the old-school style of playing two bigs on the court together, so it certainly helps to add someone like Veesaar along with 7-foot freshman Dylan Anderson (from Perry), who tacked on 10 points and seven rebounds in the game.

“Me, Zu (Azuolas Tubelis), Oumar and Dylan, everybody is their own way, so there’s a lot of versatility in our big guys,” Veesaar said. “We can all stretch the floor, and we can play quick. We just got to pick it up and be better with the ball, make less turnovers.”

Ballo, who played center behind Koloko last season, appears ready to dominate. He tied Veesaar’s game-high 16 points and said he worked hard all offseason to expand his game. With a minute remaining, Ballo, listed at 7-feet, 260 pounds, stole the ball and ran the floor for a dunk to give the Blue team the lead.

“I’m not sure if I could make that play last year because I was not as fast and didn’t have great handles,” Ballo said, semi-jokingly.

Lloyd said he wasn’t sweating a poor performance by Ramey in the Red-Blue game and added that the guard is the newcomer who could bring the most to the team as a “natural leader” with experience. He started 20 games or more in each of his four seasons at Texas.

“I think Arizona is going to be able to put a nice finishing touch on his college career and set him up for that next step, whatever it may be,” Lloyd said. “I’m going to take it really personal to make sure that I try to deliver on everything we talked about when I recruited him.”

Lloyd also said highly-touted 17-year-old point guard Kylan Boswell, an AZ Compass Prep graduate who reclassified to play for the Wildcats this season and is currently injured, is another player with natural leadership qualities and playmaking skills.

Ramey and Pelle Larsson, last season’s Pac-12 Sixth Man of the Year who Lloyd thinks will be an all-conference-caliber player this season, will have the tough task of replacing wings Dalen Terry and Bennedict Mathurin, both first-round NBA draft picks.

Returning sophomore Adama Bal, who showed flashes of his potential late last season, freshman forward Filip Borovicanin from Serbia, and Henderson, who Lloyd called “savvy” with “great instincts,” also are expected to be in the mix at the wing.

Tubelis and Larsson advanced to the championship round in the night’s dunk competition.

Both received perfect 60s on their final dunks, but Tubelis’s 360-degree windmill slam won the contest based on fan reaction. Larsson lifted up Kriisa for the slam instead of dunking the ball himself for his last attempt.

At halftime of the scrimmage, the teams were switched around, and the Blue team started the second half with what could end up being Lloyd’s starting five when real games begin: Kriisa, Ramey, Larsson, Tubelis, and Ballo.

That group managed to come back from a 12-point deficit to win the game 49-45 over the Red team, which was composed mainly of practice squad players in the second half.

“Playing in front of the crowd for the first time, it felt amazing,” Veesaar said. “I mean … it was just really hard because you play against your own teammates, and it’s not really like a real game. Normally, when you (make) your debut, it’s like against a real team. (You get) more into it. Kind of hard to play against your own brothers.”

Lloyd called Arizona a “special place” to play because of the community and history of the program. He added that this was a perfect opportunity for his players to play in front of a full stadium and celebrate Arizona basketball, especially with the premiere of the upcoming documentary on Lute Olson screening on campus at Centennial Hall before the game.

Ayton, the Phoenix Suns center, drew the largest round of applause in his surprise appearance, and all of the Wildcats soaked it in.

“The longer I’m here, the more I love it,” Lloyd said. “And it’s been really cool to have these former players, you know, embrace the program like they are.

“And to make the effort they did to come here and be a part of this was really cool.”

Afterward, at an event hosted by the team’s NIL collective, Arizona Assist, fans mingled with the Wildcats coaches along with Jefferson, Terry, and Markkanen.

“I think for us, seeing those guys who played here a long time ago, we’re really grateful for them,” Ballo said. “We are here because of them. They set the standard high, and every time we play in front of them, we know they’re watching us. So we have to do our best for the program and for those guys who made this possible for us.”

Perhaps capturing the attitude of the 2022-23 Wildcats as well as the program’s past, Lloyd said his message to his players as the season approaches is simple.