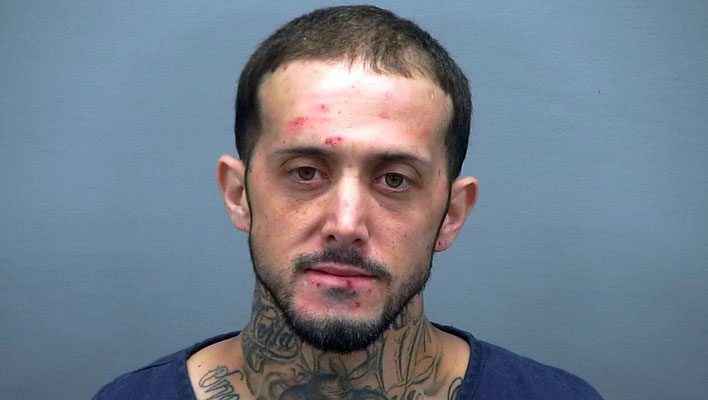 Contributed Photo/Courtesy GCSO: Anthony Garcia was booked into the jail on two warrants after being run down by a probation officer while he was fleeing from police on a bicycle.

SAFFORD – Police got a two-for-one bust of wanted individuals July 5, after the first suspect requested his personal items taken to his girlfriend, who ended up also having a warrant for her arrest.

According to a Safford Police report, the situation started when an officer in an unmarked patrol vehicle noticed a bicyclist fail to stop at the stop sign at the intersection of 9th Street and 6th Avenue.

The officer pursued the bicyclist, later identified as Anthony Joseph Garcia, 30, and learned that Garcia had two active warrants for his arrest for failure to appear on a shoplifting charge and the other was in relation to a previous guilty conviction for assault. Garcia later pleaded guilty July 8 to the shoplifting charge.

As the officer continued the pursuit, a second officer in a marked police vehicle joined as Garcia ran another stop sign at 8th Avenue and Court Street.

After crashing, Garcia was evaluated by paramedics from Lifeline Ambulance because he said his head hurt where he had struck the doors. Garcia later also said he believed his finger was broken and was given an icepack from nurses during booking at the jail.

When he was being processed, Garcia requested his property and bicycle be given to his girlfriend, Jorden Simms, at her residence in the 1000 block of S. 5th Avenue.

Prior to taking the property to her, the officer looked up Simms and saw that she had a warrant relating to a shoplifting charge.

Upon arrival at Simms’ residence, the officer located Simms and placed her under arrest for the warrant and booked her into the jail as well.