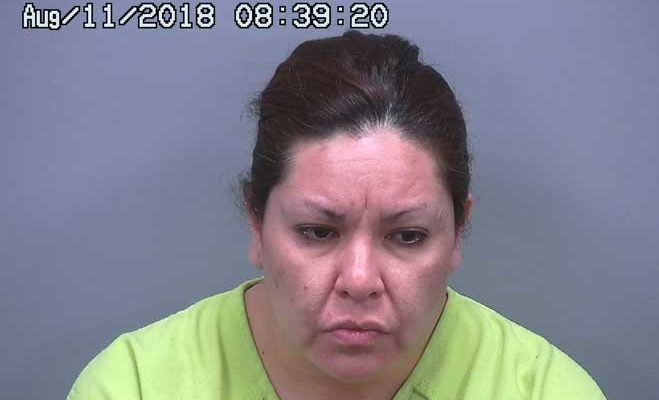 Contributed Photo/Courtesy GCSO: Dora Gandarilla was booked into the jail on charges of possession of a narcotic drug and drug paraphernalia, and driving on a suspended license.

SAFFORD – A 6-month pregnant woman was apprehended with .2 of a gram of heroin early Saturday morning after being pulled over for having an expired license plate registration.

Dora Gandarilla, 37, was arrested and booked into the Graham County Adult Detention Facility on charges of possession of a narcotic drug (heroin), possession of drug paraphernalia, and driving on a suspended license.

According to a Safford Police report, an officer was on patrol at about 2:27 a.m. when he noticed a vehicle parked outside a residence on Valley Avenue where there had been recent drug activity.

As the first officer ran the license plates and learned the vehicle’s registration was expired, a second officer who happened to be in the same area informed the first officer that he had spotted a vehicle heading east on 7th Street toward U.S. Highway 70.

The first officer then caught up to the vehicle as it turned onto E. Hollywood Road and he performed a traffic stop.

The driver, Gandarilla, was reportedly shaking and stuttering her words as she denied having any weapons or drugs. Gandarilla advised that her driver’s license was suspended and she was subsequently placed under arrest.

During a tow inventory of the vehicle, the officer located heroin in the center console. Gandarilla denied knowledge the drug was in her car and said she had quit using heroin a month prior.

Gandarilla was then transported to the jail and her vehicle was towed from the scene.