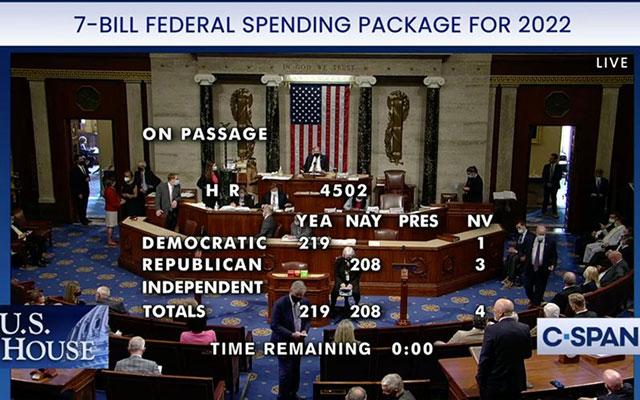 Photo Courtesy C-SPAN: While the majority of House votes – about 92% – were cast in person this year, more than half of all members cast at least one vote by proxy, letting another lawmaker cast their vote when they were physically absent. Some cast hundreds of such votes, including two Arizona lawmakers. Critics say the policy, introduced in response to the pandemic, is being abused, but supporters say it lets Congress work remotely like businesses everywhere.

WASHINGTON D.C. – More than half of Arizona’s House delegation cast votes by proxy this year, including two who were among the top remote voters in Congress and another who once called proxy voting “shameful and unconstitutional” but did it anyway.

They were in good company: 260 lawmakers had cast at least one vote by proxy this year before the House left for its August recess, according to a Cronkite News review of voting records, with some members doing so well over 200 times for the 254 roll call votes before the recess.

Proxy voting, in which a member who is not present designates another member to cast her vote on the floor of the House, was introduced for the first time last year in response to the pandemic. Critics claim that it’s unconstitutional and that makes it even harder for a divided Congress to work together.

But supporters say there is no reason for Congress to reject the technology that lets it, like workplaces everywhere, work remotely during a pandemic.

“Like millions of Americans all over the country, I feel fortunate that we have the technology to do our jobs and remain safe during this ongoing global pandemic,” said Rep. Ann Kirkpatrick, D-Tucson, whose 222 proxy votes was sixth-most in the House, just ahead of fellow Tucson Democratic Rep. Raul Grijalva who voted by proxy 221 times.

Those accounted for just under 87.5% of the 254 House roll call votes from Jan. 1 through July 29, according to a hand tabulation of the votes by Cronkite News. The tally only counted proxy votes, it did not look to see if the remaining votes were cast in person or if the member simply did not vote on those roll calls.

After Kirkpatrick and Grijalva, the next highest number of proxy votes in the Arizona delegation belonged to Rep. Paul Gosar, R-Prescott, who had other members cast his vote 38 times. That was despite Gosar’s characterization last year, in a since-deleted tweet, of proxy voting as “shameful and unconstitutional,” a scheme by Democrats who “didn’t show up for work this week” but still got paid by taxpayers.

Gosar’s office did not respond to requests for comment on his proxy voting record, but his position was typical of Republican members, a number of whom sued House Speaker Nancy Pelosi last year in an attempt to block the practice.

Republicans were far less likely to vote by proxy, but many still did: While 171 Democrats voted by proxy at least once, 89 Republicans did so, including several who were part of the unsuccessful lawsuit against Pelosi.

In Arizona, Gosar was slightly ahead of Rep. Ruben Gallego, D-Phoenix, who cast 35 proxy votes, and Rep. Tom O’Halleran, D-Sedona, who only used the procedure 21 times, or about 8% of the time.

“While proxy voting has allowed for our important work to continue in extreme public health circumstances, including the ongoing COVID-19 pandemic and for members’ related health concerns, I feel that the work of Congress is best done in person,” he said.

That was a point hammered on by Lesko and Schweikert.

“Congress members have always gathered in-person to do business,” Lesko said. “I think it (proxy voting) is totally unconstitutional, and that’s why I am one of the people who choose to vote in person.”

Schweikert said proxy voting made sense when it was first implemented last year, with travel challenges and legislative leaders hoping to minimize contact. But it is no longer rational with the availability of vaccines, he said, and its continuation is “developing long-term damage to the institution.”

“My belief is things like proxy voting and totalitarian control of everything here in Congress has really broken down human relationships that are necessary to make a representative democracy work,” Schweikert said.

When proxy voting was implemented on May 15, 2020, it was the first time in history House members were able to vote without being physically present.

Under the policy, members have to file a letter with the House clerk stating that the “ongoing public health emergency” kept them from attending in person, and designating another member as their proxy. A proxy cannot vote on an issue unless there are written directions from the remote member on exactly how to vote for each separate measure that comes up.

The policy has been extended 10 times, with the latest extension announced June 28, to run through Aug. 17. Pelosi said the extension was warranted after the House physician and sergeant-at-arms confirmed that the COVID-19 health emergency still existed.

That extension makes sense to Kirkpatrick, given the recent rise in COVID-19 cases.

“As we see the delta variant surge throughout the country, extending the proxy-voting process is the rational course forward,” she said.

But others expect the policy to be extended yet again, with or without a public health emergency, when Congress comes back from recess.

Lesko thinks the temptation will be too great for lawmakers who have become accustomed to voting while they are on vacation, or sick, or “just don’t want to show up to work because they’re fundraising.” Or, as Schweikert said when they can “vote from a boat as we’ve had one member do.”

Members of Congress have punishing work schedules, and proxy voting makes their lives easier, and so, of course, most will make use of the option and support its continuation,” said Phillip Wallach, a senior fellow at the American Enterprise Institute.

“Because members like proxy voting, and because leadership has come to realize that the practice only enhances their control over their chambers, I expect to see proxy voting extended in the House,” he said.

The renewed threat posed by the COVID-19 delta variant will likely be cited, Wallach said, but he noted that there is likely to be “little effort made to ensure that uses of proxies are actually related to taking measures to avoid or deal with the virus.”

Lesko said that with the ready availability of vaccines for members and the recent reimposition of a mask mandate for everyone in the House, regardless of vaccination status, “there should be no excuse” to not vote in person. “None. Zero. Zip.”

Wallach thinks proxy voting is “just about the worst way” possible of dealing with the pandemic, and he worries it could become “normalized by long usage.” It is efficient, he said but misses a key part of legislating.

“If voting one way or the other is all that really matters for members of the House, then proxy voting seems just fine,” he said. “But our Constitution relies on legislators to be much more than lever-pullers.

“The very meaning of congress is ‘to come together,’ and the core job of our representatives is really to bring themselves into contact with other representatives from around the land, such that they can figure out their common interests and understand just what is really most important to people all over the country,” Wallach said.

Schweikert said that voting remotely will not help with what he calls “a fairly intense disharmony right now in Congress.”