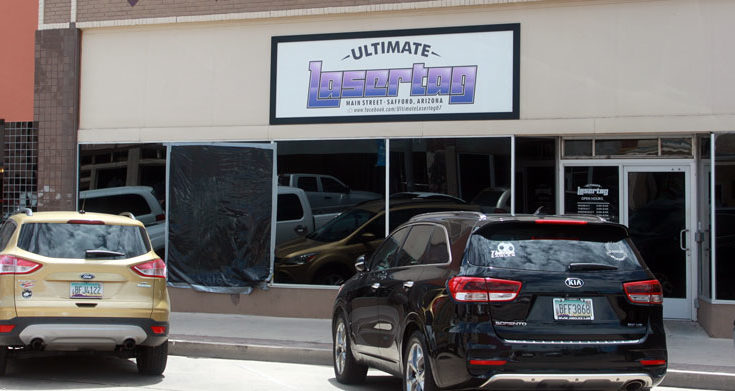 Jon Johnson Photo/Gila Herald: The Ultimate Lasertag building was damaged in the early morning hours of Monday, Aug. 12, when a parked truck jumped the curb and collided with the business.

SAFFORD – Police are on the lookout for a black, four-door Nissan Frontier with front-end damage.

The vehicle is believed to have crashed into the Ultimate Lasertag building at 515 W. Main St. on Monday, Aug. 12.

An officer was initially dispatched to the area at about 8:33 a.m. to inspect the damage and scene.

After speaking with the owner of the building, the officer requested a Safford Information Technology employee review city surveillance video cameras in the area to see if the incident was captured.

A short while later, the employee showed the officer a video of a black, Nissan Frontier park in front of Shane’s Place, a bar located at 609 S. 6th Ave. The driver is seen on video exiting the truck and entering the bar at about 11:43 p.m., Sunday night. At about 2:04 a.m., the truck is then seen leaving the bar northbound on 6th Avenue without its lights on and then eastbound on Main Street. The officer noted the vehicle moved very slowly and was not in the correct lane of travel.

The truck then parked in front of the Ultimate Lasertag building and remained stagnant until 3:01 a.m.

At that time, the truck then lurched forward, jumped the curb and struck the building. The driver then attempted to drive on the sidewalk but could not get through due to the city’s electric box and instead backed up and re-entered the street and headed eastbound.