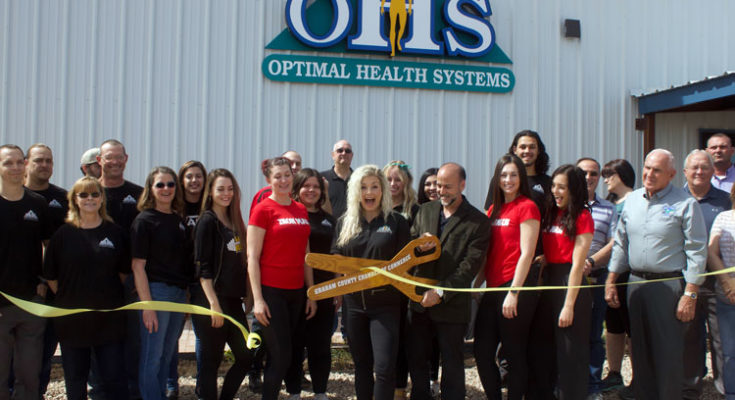 Jon Johnson File Photo/Gila Herald: The Optimal Health Centre had two ribbon cuttings for its grand opening in March 2019. On Tuesday, Pima Mayor C.B. Fletcher announced the business – which had a 10-year lease on the facility and land – purchased the facility outright.

PIMA – The public/private economic development opportunities enacted under former Pima Town Manager Sean Lewis are paying off for the town.

In addition to building the Optimal Health Centre with a government program zero-interest loan, the industrial zone on the south end of town has taken off with tenants looking to purchase the land their buildings reside and more businesses looking to begin operation in Pima.

During the Pima Town Council’s Tuesday night meeting, Mayor C.B. Fletcher advised that Doug Grant and Occupational Health Services (OHS) paid off the building and land for the Optimal Health Centre. The building was created after Pima received a zero-interest loan of $375,000 through a rural economic development fund from the United States Department of Agriculture and administrated by the Graham County Electric Cooperative. Former Pima Town Manager Sean Lewis was essential in the development of the property.

Doug and Hilary Grant put in roughly $65,000 to finish the building and held a grand opening in March 2019.

The town voted to purchase the old Graco property at its Oct. 3, 2017 meeting, with the caveat that Optimal Health Systems sign a 10-year lease. OHS is a whole-food nutrition company that Doug Grant started in 1997 and has operated in Pima since 2003. It, along with its sister company, Gains In Bulk, serves a variety of people, including professional athletes, doctors, and people just wanting to improve their health.

At the council’s Tuesday night meeting, Fletcher advised Grant and OHS had been paying $4,000 per month on his lease but then purchased the property outright for $615,000. Out of that money, the town received $425,000 and the GCEC received the rest.

At the Tuesday night meeting, Mayor Fletcher advised that property between 200 South and 300 South off U.S. Highway 70 will be the home to a purified ice/water business.

Most of the land has already been purchased by the business owners, who also want to purchase a dilapidated mobile home near the property. Fletcher advised that the sale of the property had been approved by the council a year-and-a-half ago and now will move forward as soon as the bank provides the title to the town.

Pima Mayor Fletcher advised that the town is getting the land in the industrial zone surveyed and appraised so that two businesses that have already built facilities in the Industrial Zone off 1200 South can move forward with their desire to purchase the land the businesses sit upon. The council also ordered the Pima Planning and Zoning Commission to become involved in the process.

A paper recycler has a contract on a lease for two years, but that the business owner is planning on purchasing the land. A metal fabrication business has asked for a price for the land its business sits atop and the P+Z and appraisal should report back to its owner to see how many acres he would like to purchase.