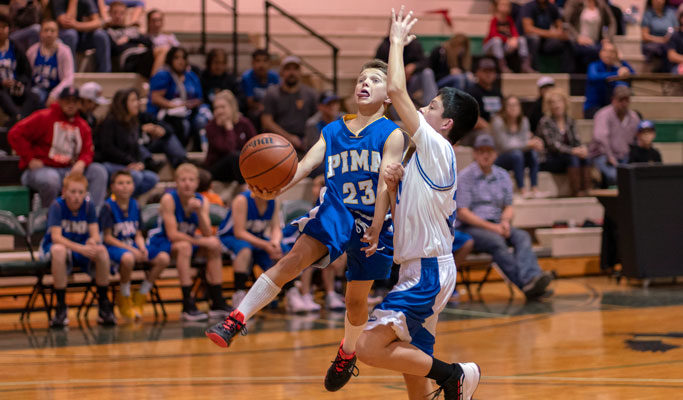 Contributed Photo: Aiden Alder throws up a shot during the Gold Medal Basketball Tournament. Pima came back from the losers’ bracket to defeat Thatcher for the championship, Saturday, 33-21.

THATCHER – For the third year in a row, the Pima Elementary basketball team took home the championship in the Gold Medal Basketball Tournament on Saturday, sponsored by the town of Thatcher and Thatcher schools.

Tournament Director Kyle Hull said the weeklong tournament was a success and expressed his surprise at the tenacity of the athletes.

“I was impressed by the talent that was showcased and how competitive these kids are,” Hull said. “They were pushed from that competitiveness and became better as the week ended. That’s what made it fun!”

“Thatcher has a great team,” Pima head coach Jed Hughes said. “After the loss to them on Wednesday, it helped us realize that we were going to have to increase our level of play on both sides of the ball if we wanted a chance to win out. These young men really came together as a team. They played well to their strengths, and I’m proud of the effort they put into getting the win.”

The Roughriders were paced by Clark Ashby, who finished with 14 points – six of them from the foul line.

Other players who got in the scorebook included Rhett Hughes and Jeramiah Martinez, both with six points, Keegan Corona with five, and Liam Goodman with two.

Brett Jones helped keep it a competitive game for Thatcher with nine points, followed by Wyatt Nicholas and Tyler Lunt each with three, Wally Haller and Ethan Homer with two each, and Patrick Nicholas and Jett Howard had one point apiece.

On the girls’ side, Fort Thomas dominated Safford A (sixth grade) team in the championship, 36-15.

The Apaches were paced by Demetria Dosela, who outscored the entire Safford team by herself and finished with 18 points. Other scorers included Adaia Lorenzo with four, Aliyah and Isabella Stanley with three each, and Kaylee Benally, Princess Garland, Kali Rope, and Jayla Wilson each with two points.

For Safford, Bre Arbizo and Hannah Schade led the way with four points each, followed by Erica Schmidt with three, and Donna Luna and Miana Carrasco both with two each.

The double elimination tournament featured six teams in both the boys’ and girls’ brackets, with Safford and Thatcher each fielding an A team (sixth grade) and a B team (fifth grade). The other teams were from Pima and Fort Thomas. The games were held Monday, Wednesday, and Thursday, with the championship game held Saturday.

Pima arose from the ashes of the losers’ bracket to come back and beat the team that put them there.

For Fort Thomas, the road to the girls’ championship was smoother as the Apaches plowed over the competition in straight games. Fort Thomas beat Thatcher B to open the tournament and followed that up with wins over Safford A, Pima and then another victory of Safford A, who beat Pima in the semifinal.

Coaches and parents commented on how well the tournament was ran and wished to congratulate Kyle Hull and his wife, Kari Hull, on all their hard work into making it happen.

Kyle Hull also expressed his appreciativeness to those who helped make the tournament a possibility.

“I want to thank some people (who) make this all possible,” he said. “(Thanks to) the town of Thatcher, Thatcher High School, and Thatcher Middle School for their facilities and Kari Hull for organizing and putting it into action. Everyone (who) helped along the way and the teams for participating, thank you!”