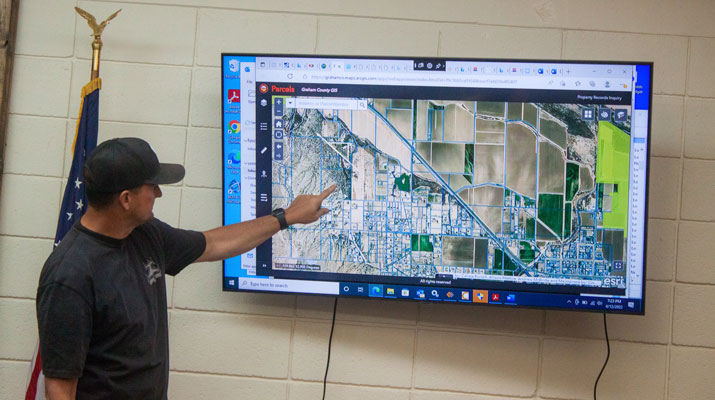 Jon Johnson Photo/Gila Herald: Craig Bloomfield of Velocity Builders shows the Pima Town Council where his proposed 40-acre subdivision will be built. The council unanimously voted to table approval of the subdivision until more information regarding potential traffic impacts is gleaned.

PIMA – There has been an explosion of new homes in Pima but a newly proposed 40-acre subdivision in the western portion of the town has been put on pause to examine potential traffic impacts.

On Tuesday, Craig Bloomfield of Velocity Builders presented a preliminary plat for his “Upper Canyon” subdivision to the Pima Town Council. The subdivision is to be located off 400 North with the entrance roughly half a mile west of the intersection with 1200 West (Patterson Mesa). Bloomfield informed the town of his plans to improve 400 North and place gravel on it. The rest of the subdivision would be paved with gutter and an on-site retention basin for floodwaters up to a 100-year flood event. Heath Brown of Heath Brown Engineering, LLC serves as the engineer for the project.

The plat calls for 40 lots with the average size being around three/quarters of an acre. Bloomfield told the council that he is planning on building affordable homes roughly 2,000-square-feet in size for a much-needed market. The preliminary plat was approved by the Pima Planning and Zoning Committee the previous week.

According to Pima Town Manager Vernon Batty, the Graham County Electric Cooperative is already upgrading the water pipe to the area due to current low water pressure, so it is not concerned about the added number of homes to its system. Accordingly, Southwest Gas had no worries as well. All of the utilities will be underground, according to Bloomfield.

Bloomfield said while the size of the subdivision isn’t feasible for him to pave 400 North for the half-mile to get to the proposed subdivision if the town performed chip-sealing on it as part of its annual road maintenance after he improved it to a gravel road it would basically have a paved road there.

All of the roads in the area, including the paved roads in the Riverback Subdivision, are private property and are not currently maintained by the town.

Pima Councilor Lucas Hoopes compared the Upper Canyon subdivision with the Alder Heights subdivision on the east side of town and said he “loved the idea” but has concerns about a potential traffic impact along 200 North (Tripp Canyon).

“We’re dealing with a lot of growth in certain areas of the town and we are trying to drive down little itty bitty tiny roads,” Hoopes said. “I love the idea, it just makes me nervous because I go and pick up my kids from DPA (Discovery Plus Academy) every day and I see the congestion; I see the traffic; I see all of that. I don’t want to commit ourselves – personally, I think there needs to be some more due diligence as far as a maybe a traffic count . . . It just makes me nervous just because Tripp Canyon Road is such a busy, busy road.”

Developer Craig Bloomfield also lives in the area and is just northwest of Matthew’s Pond off 1300 West. During the discussion, Pima Town Manager Vernon Batty asked Bloomfield which route he traverses and Bloomfield said he takes the short jog north down 1200 West (Patterson Mesa) to the highway and therefore bypasses 200 North (Tripp Canyon) entirely. He said he believes the majority of any new traffic from the subdivision would take 400 North all the way to 1200 West (Patterson Mesa) and then north to the highway, especially if the town chip seals his improved gravel road.

Hoopes said while he loves the idea of the subdivision and would love to approve it, he moved to table the item to receive more information regarding potential traffic impacts on the area. The motion was seconded by Vice-Mayor Sherrill Teeter and was approved unanimously.

On a much smaller scale, the council also unanimously denied a request from Boyd Bryce for a variance to rezone his commercial double lot at 80 N. Main to put in two duplexes.

However, council member Hoopes said the moratorium was in place to allow Planning and Zoning to go over the town’s code and make decisions regarding how it wants multifamily housing to look and where.

Bryce said the property is already commercially zoned and he could put a commercial-style building on it instead of the homes he is proposing – if there was no moratorium on new building permits that is. Bryce advised that he would be ready to begin construction immediately and believed it would take about a year for the improvements to be complete.

Hoopes said the town has already turned down other such requests and made a motion to deny Bryce’s variance request. The motion was seconded by Vice-Mayor Sherrill Teeter and was approved unanimously.

Afterward, Mayor Rogers instructed the town employees to complete their work on the multi-family housing information so the moratorium can be removed sooner than later.