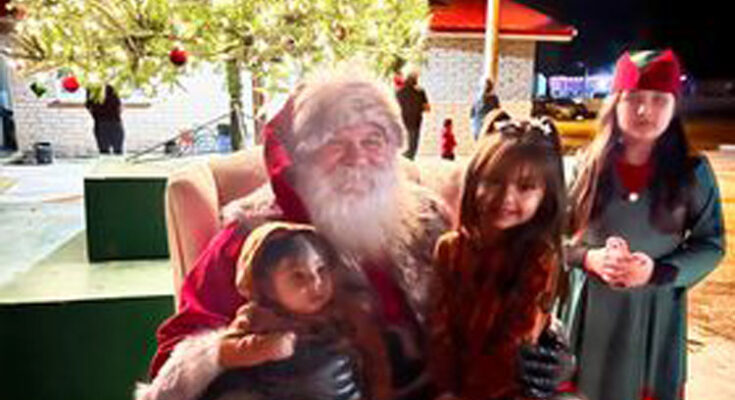 Contributed Photo/Gila Herald: From left, Noah and Nadalie Rivera tell Santa Clause (Gabe Ferrin) what they would like for Christmas at the Pima Town Christmas Tree lighting event.

PIMA – While it was a slimmed-down, low-key event, several children’s faces lit with joy at Heritage Park in Pima on Thursday when Santa Clause (Gabe Ferrin) officially lit the Pima Town Christmas Tree.

Spearheaded by Pima Vice Mayor Sherrill Teeter, the event also was made possible by volunteers like longtime Pima residents Pima Town Council member C.B. Fletcher and his wife, Edie, who were busy in the kitchen preparing the hot cocoa and setting out the various cookies.

Spurred on by Teeter, the crowd began singing Christmas Carols and sure enough, Santa emerged from the Pima Fire Department and lit the Christmas Tree, opening the holiday season for the town. Afterward, Santa posed for pictures with children and their families and got all their requests in to bring back to his elves.

Teeter also announced at the event that the town’s Christmas Wish Trees with wish tags for items for those less fortunate have been all taken and are being fulfilled.

This is the fifth annual Pima Wish Tree event and Teeter asks those who took tags to return the unwrapped items to either Pima Town Hall or the Pima Library by Dec. 15.