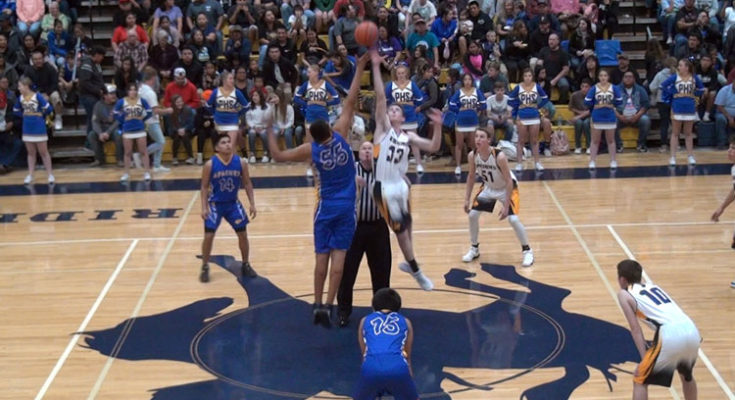 Will be on the road until next year

PIMA – It was the season opener for both schools, but it had a playoff-like atmosphere as the Fort Thomas fans packed Stan Smith Gymnasium for its contest with the Pima Roughriders.

After a slugfest of an opening period, the Roughriders utilized their lockdown defense to spark a 14-0 run in the second period to help propel them to a 67-54 victory.

In addition to their defense, it was the Roughriders’ ability to hit the long ball with 10, 3-pointers counting for nearly half their points that helped seal the deal against the Apaches.

“We came out hard on defense, that’s always our goal,” said Pima point guard Alec Judd. “The first quarter was a little tough but once we got in the rhythm I thought we did really well on defense.”

“Fort Thomas is a really good offensive team,” said Pima head coach Cliff Thompson. “We played good defense on them and they hit shots anyway, which can be kind of frustrating at times.”

Latrell Titla asserted himself early on for Fort Thomas as he started a personal 7-0 run of his own that began with an old fashioned 3-point play followed by a big block shot. Titla then came down the court and hit a 3-pointer and followed that up with another bucket to give the Apaches a 15-10 lead. Despite being hounded and double-teamed by Pima’s relentless pressure whenever he touched the ball, Titla went on to lead his team with 17 points on the night on five field goals, his 3-pointer and a perfect 4-4 from the free-throw line.

“We just gotta try harder,” Titla said after the game. “We need to work hard at practice and stay in shape.”

“The first quarter we got the lead then when the second quarter came around we – our defense was kind of slow,” said Fort Thomas head coach Matthew Dona. “They didn’t move around and that’s where they were shooting outside 3-pointers. We weren’t closing out, so that was one of the things that got them the lead the second quarter.”

While the big man for Fort Thomas did the work for the Apaches, it was Pima’s three guards who led the way offensively for the Roughriders. Tim Salyer finished the game with 17 points, while Alec Judd and Drew Thompson were right there with 16 points apiece. Salyer sunk three 3-pointers on his way to his total, and Thompson had four, but Judd surprisingly didn’t have any and got his points off seven field goals and by going 2-2 from the charity stripe.

It was Thompson and Judd who combined for the 14-point run in the second quarter, but it was sparked by an outstanding defensive play by Salyer. After falling down going for a loose ball, Salyer recovered in time to get up and block an NBA-length 3-point attempt by Rogers for the turnover.

The run gave the Roughriders a 38-26 halftime lead, but early in the third period, the Apaches cut the deficit to just 6 points after 3-pointers by Rogers and Johnson. However, that would be the closest the Apaches would come for the rest of the game.

“I think we have a good shot this season with our players right now,” Judd said.

Kaleb Blair also contributed to the win and had a big game off the bench by sinking three 3-pointers for 9 points on the night and took a hard charge to help seal the game late in the fourth period. Jacob Brimhall (5 points) played tough defense against Titla all night and Levi Thygerson – who is coming off surgery to his meniscus – also contributed to the defense and stopped a fast-break with a big block. He finished with 4 points to fill out the scoring for the Roughriders.

“It was our first game so we know what we need to work on,” Dona said. “Come practice time tomorrow, we’re going to go over all the mistakes that they made so they can learn from it. We have a long season still.”

Pima will be on the road for the remainder of 2019 and won’t have a game at its home gym until the team welcomes Scottsdale Christian to town on Saturday, Jan. 11.

“I was really concerned about this game knowing how tough Fort Thomas is,” Cliff Thompson said. “I feel like they’re the favorite in the 1A (division) and I think they’re going to beat a lot of really good teams this year . . . I’m really excited for a couple of our guys (who) stepped up and played well. Kaleb Blair played really well for us. And then our three guys (who) we are going to rely on a lot, Drew, Alec, and Tim did a really good job scoring for us and playing good, solid defense against their guards. And our big guys did a good job rebounding and playing defense and things like that, so I feel like it was a good team win for us, especially right out of the gate.”

In other local action:

Safford will next play Wednesday, Dec. 4, for its home opener against the Thatcher Eagles. 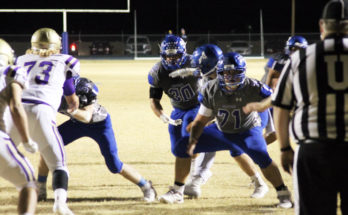 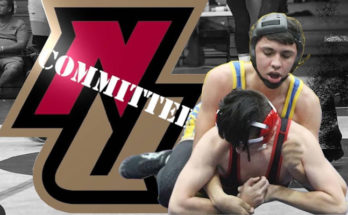