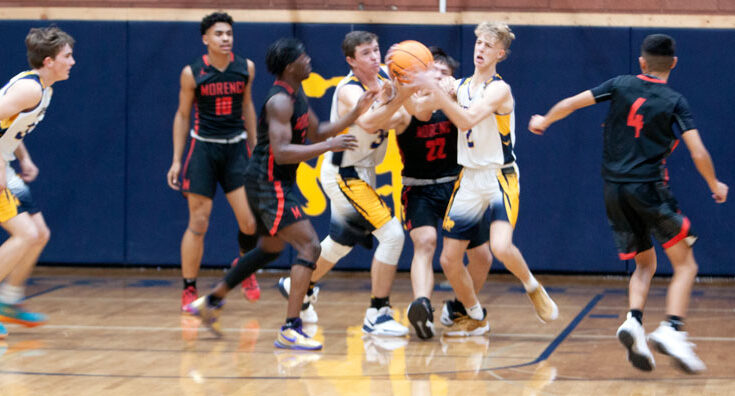 PIMA – The Pima Roughriders boys basketball team has started region play 2-0 and is set to challenge No. 5 Willcox for the top perch in the 2A San Pedro Region.

“Overall, we played well,” said Pima head coach Cliff Thompson after the Morenci game. “I liked everybody who came into the game.”

The game was a calling out party for reserve center Nathan Skiba, who led the Roughriders with a career-high 19 points on 9-10 shooting (90%) in just 11 minutes of game time. Skiba was a beast down low and dominated the smaller Wildcats, scoring easily two feet from the basket and grabbing 11 rebounds for the double-double.

“Nathan Skiba was getting after it, and I like to see that,” coach Thompson said. “He has a certain skill set and it works really well in certain situations and he maximized it tonight. He used his bulk, took up space, and scored a lot of points, so I was really happy for him.”

Starter Seth Russell had an equally big night down low as all 18 of his points were in the paint from 9-10 shooting (90%), with 11 rebounds for a double-double.

The Wildcats came to play and had the game tied 9-9 after about 5 minutes of play. However, Coy Miller nailed a 3-pointer and then made a steal and fast-break layup to jump-start a 12-2 Pima run to end the first quarter 21-11.

Pima extended its lead in the second quarter through play down low by Skiba and Russell, with an assist of a 3-pointer by Leland Thompson.

Morenci came out strong in the third quarter, which was more competitive yet ultimately won by Pima (15-12) as Skiba went off for 8 in the quarter.

The Roughriders finished off the fourth with a bookend of the first (21 points) and left the court with the 73-44 victory.

“We just need to keep getting better as a team,” coach Thompson said. “We’ve got the playoffs not too far – we’re a month away and that’s it. So, we’ve got to start gearing up for that.”

Other scorers for Pima included Garrett Curtis with 9 points; followed by Coy Miller with 8; Grant Ashby with 7; Leland Thompson with 6; Sam Ray with 4, and Pierce Ashby with 2 points.

A bright spot for Morenci was Tristen Sanchez who hit four 3-pointers and four field goals for a game-high 21 points. Other scorers for Morenci included Christian Mutengela with 8; Donnie Vozza with 5; Daylen Johnson with 4, and Derek Saenz and Noah Chavez with 3 points each.

Pima will next host the Willcox Cowboys on Wednesday, Jan. 19, starting at 7 p.m. Currently, Willcox has the edge over Pima for first place in the 2A San Pedro Region due to their respective conference schedules, however, Pima previously defeated Willcox 72-26 during the EAC Holiday Tournament.

Morenci has lost its last seven games in a row and will look to turn the ship around by hosting the No. 40 Tombstone Yellow Jackets on Monday, Jan. 17, starting at 7 p.m.

Click here to see the Gila Herald’s photo album of the game between Pima and Morenci.

In 3A action, the No. 36 Safford Bulldogs (2-2 region, 2-3 conference, 7-9 overall) defeated (Tucson) Empire 61-25. The Bulldogs next play a regional game against the No. 33 Tanque Verde Hawks on Monday, Jan. 17, starting at 1 p.m. at McKale Memorial Center on the University of Arizona campus.