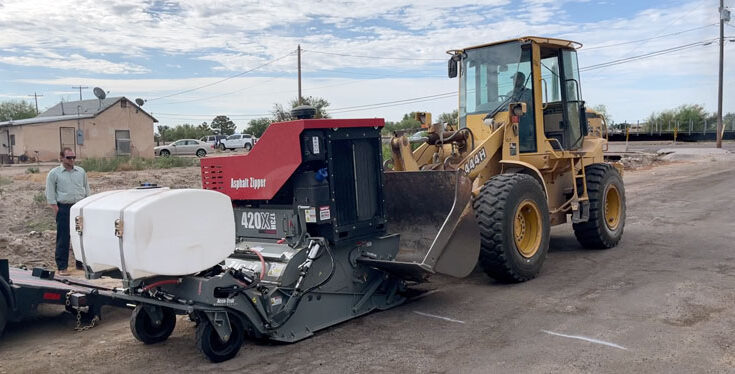 PIMA – There’s a reason the Asphalt Zipper crew doesn’t mind hauling its product around the state for demonstrations – once a municipality’s government sees it in action the orders come right after.

That was exactly how it played out in Pima on Tuesday morning, as the Pima Town Council was treated to such a demonstration and then unanimously voted right there on the street to not only purchase the machine but an upgraded 4-foot model for $255,000. The larger version includes a baffle in the rear to assist with leveling. Mayor Dale Rogers was unable to attend the demonstration.

“I like it a lot,” said Pima Vice Mayor Sherrill Teeter. “I think we’re going to put it to really good use – especially out at the arena. All our roads in Pima need it.”

Joining the council at the demonstration were various town employees, a couple of representatives from Graham County who were interested in seeing the machine, and a few others.

After the vote, Pima Town Manager Vernon Batty signed a purchase agreement with the company. Batty told the Gila Herald that the town is still deciding on whether to finance the purchase or pay the full amount outright and that he expects delivery of the new equipment likely in September. As for the section of road that was pulverized for the demonstration, it will be compacted and put back in use until the full road can be repaired.

Batty said that once town crews are fully trained and up and running, a block of the road would likely take them only a couple of hours to completely mill into the new material.

The process is simple. First, the asphalt zipper pulverizes the existing asphalt or chip seal surface and blends it with a predetermined portion of the base. Following that, the blend can be graded and reshaped before compacting and then finishing by paving over or with a chip seal. For Pima, Batty said the town would chip seal over the compacted result.

“I kind of like it,” Pima Council Member Brian Paull said at the demonstration. “I’m pretty impressed so far. It made quick work of it.”

The machine Pima selected has a 4-foot cutting length and cuts up to one foot deep. The cutting blades are replaceable bullet-head carbide-tipped cutting teeth and the machine is transported on its own custom trailer.