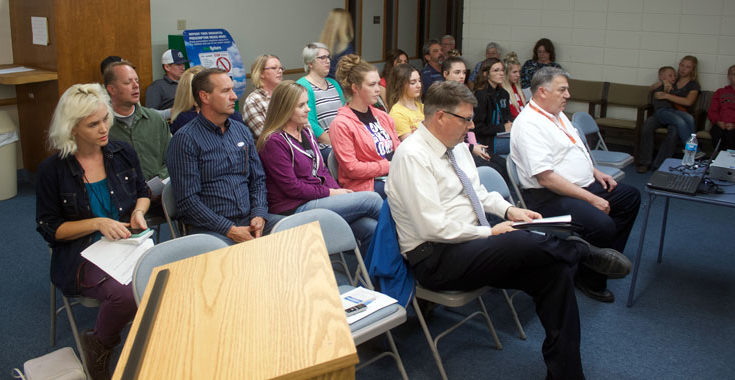 PIMA – With increasing local and regional traffic, crossing U.S. Highway 70 safely at the Main Street crosswalk in Pima by pedestrians and motor vehicles has become an issue.

At its Tuesday, Nov. 6 meeting, the Pima Town Council heard options on how to tackle the problem from Arizona Department of Transportation Safford District Engineer Bill Harmon.

Harmon said when ADOT examines an area to implement certain operational aspects, it highlights the four E’s: education, enforcement, engineering, and emergency services. Each one of those aspects is taken into consideration when designing what Harmon calls “traffic calming”, which is any mitigation effort to slow down traffic at intersection areas.

He said the basic discussion comes down to safety and cost.

“The question is – anyone would ask themselves – how safe do I feel crossing the highway,” Harmon said. “How safe do I consider it to let my child cross the street?”

That issue was brought to the town’s attention a few months ago by resident Liz McCray, who said the intersection is dangerous even when a school crossing guard is out attempting to stop traffic.

McCray said she broached the issue after her son had a close encounter while crossing the street. She quoted John F. Kennedy and said the best time to repair the roof was when the sun is shining to get her point across that it would be much better to fix the situation before a parent loses a child crossing the street.

At Tuesday’s meeting, McCray said she would continue to press the town to find an answer to the issue.

“We’ll be the squeaky wheel that keeps things going because we don’t want this to be forgotten,” McCray said.

Harmon gave several options that the town may pursue, including bump-outs at the intersection to raise pedestrians, make it less of a distance to walk across the highway and allow motor vehicle traffic to see around vehicles parked on the street, traffic-slowing devices such as rumble strips and tables like the one utilized in Clifton, signs that show a vehicle’s speed, and a pedestrian/hybrid traffic beacon that would stop traffic like a traffic light to allow pedestrians to cross.

Harmon said he wasn’t sure if Pima met the threshold to validate a pedestrian beacon, but when asked by Pima Vice Mayor Dale Rogers if that meant that a certain number of fatalities had to occur first Harmon said that was not the case. He said the criteria revolves around how long a pedestrian has to wait to cross and how much time they have to get across before a vehicle comes.

“Pedestrian/hybrid beacons and crosswalks do not have a component for tragedy or fatality injuries,” Harmon said.

The town will continue to work with Harmon and ADOT to see if any traffic mitigation options will be viable and welcomed by the public.