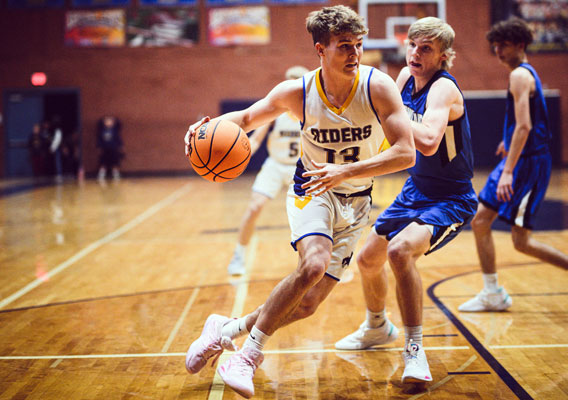 PIMA – The Pima Roughriders boys basketball team exploded for 9 points in the final two minutes of the first period to pull away from the Snowflake Lobos on Thursday night and they never looked back.

In addition to its high-powered offense, Pima used a lockdown defense to defeat Snowflake 56-41.

Seth Russell finished led the Roughriders with a game-high 22 points on 11-12 shooting and had 16 rebounds to dominate the paint with a double-double.

Russell was consistent, scoring at least two field goals in each period.

Pima held Snowflake to only two field goals in the second due partly to the reach of Pierce Ashby who defended the rim for five blocks on the night. Pierce also went 3-4 from the field and finished with 6 points.

Snowflake’s Easton Butler tried to keep it close with the long ball, but Pima answered back with Coy Miller nailing the 3. With its offense and defense clicking, Pima took a commanding 31-18 lead into halftime.

while Russell continued his dominance down low,  with the exception of one free throw, Lance Christensen  (13 points) was the offense for Snowflake in the third as the 5’9” senior point guard repeatedly scored with drives to the basket. Then following a turnover the Lobos got the ball to their hot hand and Christensen gets the bucket and the foul call.

Pima wouldn’t let them get any closer than 9, however, and the Roughriders went 9-11 from the free-throw line in the fourth period to seal the victory.

Other scorers for Pima included Grant Ashby with 11, Leland Thompson with 6, Coy Miller with 5, Garrett Curtis with 4, and Keegan Corona and Wyatt Wiltbank with 1 apiece.

Visit our Facebook page to see more pictures from the game.