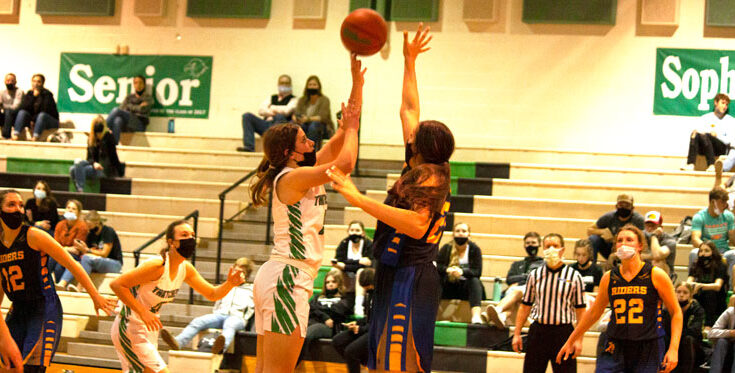 THATCHER – A defensive second period that allowed Thatcher to only score four points and a huge offensive fourth period in which Pima scored 27 led the Roughriders to rout Thatcher in the Eagles’ home opener Thursday, 62-42.

Pima head coach Roy Corona said Pima’s speed and defense were the difference in the game.

“We had a lot of layups here at the end. We just ran on them.”

The score was tight heading into the fourth period with Pima up four, 35-31. However, Saydee Allred asserted her dominance and nailed two 3-point daggers in the period to score 15 of her game-high 19 points in the fourth and lead the surprising blowout victory.

“She came up big with those 3’s,” Corona said. “That’s why she shoots them is because she can hit them.”

Ashlyn Chlarson was also dominant for the Roughriders as the Eagles had no answer for her presence down low as she easily gathered rebounds. Chlarson also hit two big shots from a long mid-range jumper that swished through the hoop. However, her play was limited due to being in foul trouble a good portion of the night. Chlarson had to sit in the second period after picking up her third foul, and again in the fourth.

“Foul trouble like that is going to hurt us,” Corona said. “We had three girls with four fouls. So, that’s hard and we don’t have that big of a bench. I had to go to a JV player there at the end.”

Four Pima players scored in double figures, including Allred (19), Chlarson (11), and Neveah Grant, and Ashlie Sherwood each hit 10 apiece. Aubrie Sherwood pitched in 7 (including a 3-pointer) and Sam Pippo scored 3 and Jayci McClain 2 on two free throws in the fourth to finish the night.

For Thatcher, the streaky smooth Ashlyn Thompson hit for a game-high 12, followed by Liv Lunt and Cassidy Wakefield with 8 apiece, Aubrey Pace with 6, and Marleigh and Haley Nicholas each had 4.

In other local girls basketball hoops:

The Morenci Wildcats (1-1 conference, 1-1 overall) fell at the Round Valley Elks on Wednesday, 40-61. Morenci will travel to St. Johns to take on the Redskins on Friday, starting at 1:30 p.m.

The Safford Bulldogs (1-1 conference, 1-2 overall) notched their first win of the season Tuesday, with a 49-20 victory over the San Tan Foothills Sabercats. The Bulldogs will host the Pusch Ridge Lions on Friday, starting at 5:30 p.m.

Mobile users swipe left to view the pictures in the slideshow