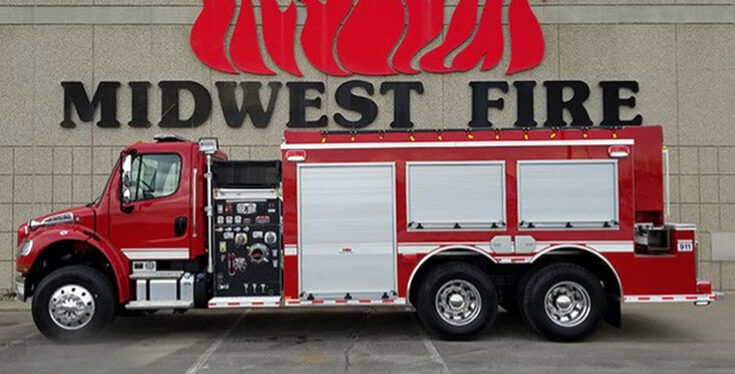 Photo Courtesy Midwest Fire: The Pima Fire District has purchased a new pumper tanker for use by the Pima Fire Department.

The new pumper truck is on a Freightliner M2 106 chassis and utilizes a 3,000-gallon UPF Polypropylene tank.

Tanker trucks are important especially for rural areas since they supply the water for the fire engines when fire hydrants are not available.

The town of Pima flew a couple of firefighters out to South Dakota to train on the operation of the new truck, and then they drove it back to Pima and arrived in town on Sunday. The two firefighters who picked up the truck are now training the rest of the department on its operation.

“It’s a great truck,” said Pima Town Manager Sean Lewis. “The Pima Fire Department has three serviceable tankers, and living in a rural area, that’s a huge asset. Two of them are new within the last three years. So, for a town our size to have two new tankers is something special.”

The town of Pima previously purchased a pumper truck for the Fire Department in 2017 aided by the inaugural “Big Splash Bash” fundraiser, which has become an annual event at the Pima Pool. The truck purchased in 2017 cost about $145,000 but with money utilized by fundraising efforts including the Big Splash Bash, the cost was only about $76,700 to the town.

Lewis said the Fire Department might have to construct some new bay doors due to the size of the new truck but that he is impressed with the vehicle and that it is state-of-the-art.

“It’s a beautiful truck,” Lewis said. “For a town our size, it’s fantastic.”