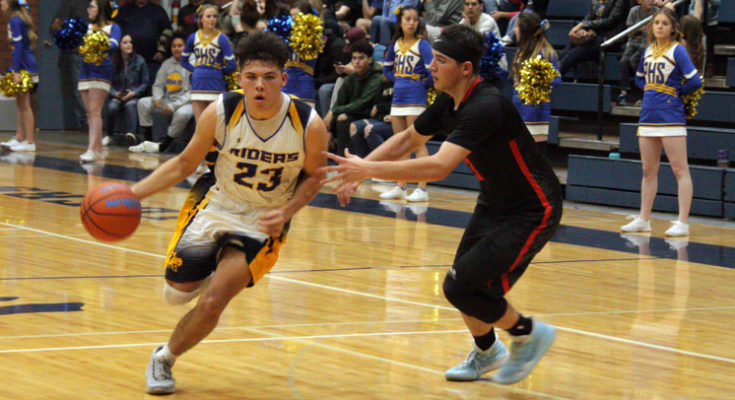 PIMA – It was a battle akin to two heavyweight prizefighters slugging it out but in the end, Pima’s inside/outside game was just a little too much for Morenci to take and the Roughriders held off the Wildcats, 69-58.

“Morenci has been playing really well,” said Pima head coach Cliff Thompson. “They beat Thatcher and have won five of their last six games and beat the No. 9 seed Phoenix Country Day on the road. They have been playing well and I was definitely concerned.”

Morenci head coach Tommy Navarrete said he was happy with the effort shown by his team.

Drew Thompson led the way for Pima by hitting five 3-pointers on the night on his way to a team-high 19 points. He was followed closely by his fellow guards Tim Salyer with 17, Alec Judd with 15, and Kaleb Blair with 10.

Judd agreed and said it was a tough game between two good teams.

“Morenci played hard,” Judd said. “They knew what was on the line, so we knew they were going to come out and play hard. We just fought back.”

Pima was down a big man with usual starter Levi Thygerson missing the game with strep throat, but he should be back for the championship game Friday.

Pima (12-0 region, 22-5 overall) won the jump and after more than a minute of feeling out the Morenci (6-6 region, 10-13 overall) defense, Blair broke the ice with a dagger from deep. However, Morenci’s Derek Waters immediately answered with a 3-pointer of his own, and the punch, counterpunch theme for the night began.

One of the reasons the game was so tight was the play of Maddux Martinez, who hit four triples from beyond the arc on his way to a game-high 21 points. He was followed closely by Shawn Michael Chavez, who had three triples to go with his 18 points.

Martinez tied the game at 10-10 late in the first period on a deep ball, but Drew Thompson and Judd answered to push the lead back to four. Chavez hit a couple of free throws to inch Morenci closer, but Drew Thompson nailed a deep, 3-point dagger at the buzzer to give Pima a 17-12 lead.

The teams went back and forth at each other throughout the second period, but after Christian Mpoyo made three the old fashioned way with an and-one play to cut Pima’s lead to just 23-21, the Roughriders went on a tear with Blair, Salyer, and Judd pushing the lead to 31-23 at the half.

Blair pushed the lead to 10 by opening the scoring in the third period, but a couple of buckets by Martinez and a 3-pointer from Chavez lowered it to just a three-point game.

Then Drew Thompson caught fire and drained three 3’s in the rest of the third by hitting from all over the court to push the lead back into double digits.

Morenci fought back again, however, and Derek Waters and Martinez also stroked the long ball to bring Morenci back within striking distance at the end of the third with Pima leading 46-41.

In the fourth, Pima turned to its senior leader point guard Judd, who orchestrated a patient offense and hit two clean mid-range jumpers to keep Pima ahead.

Morenci’s hopes for a comeback were lessened with about 2:55 left in the game when Mpoyo fouled out trying to keep Salyer from scoring. Morenci lost a tough defender, rebounder, and scoring threat as Mpoyo headed to the bench. Morenci’s stats listed Mpoyo as having snagged 6 of Morenci’s 18 rebounds on the night.

The Wildcats got within five with 2:06 left to play on a Martinez 3-pointer, but Morenci was forced to foul and Pima went 7-8 from the line in the last two minutes of the game to seal the victory, 69-58.

The Roughriders will face the Thatcher Eagles (9-3 region, 19-9 overall) for the 2A East Region Tournament Championship on Friday at Pima, starting at 6 p.m. Thatcher had to overcome a halftime deficit against Bisbee and came back to beat the Pumas, 59-47 to advance to the championship game.

“I hope we didn’t use too much tonight where we don’t have enough left tomorrow,” Cliff Thompson said.

Click here to view a photo album from the game.