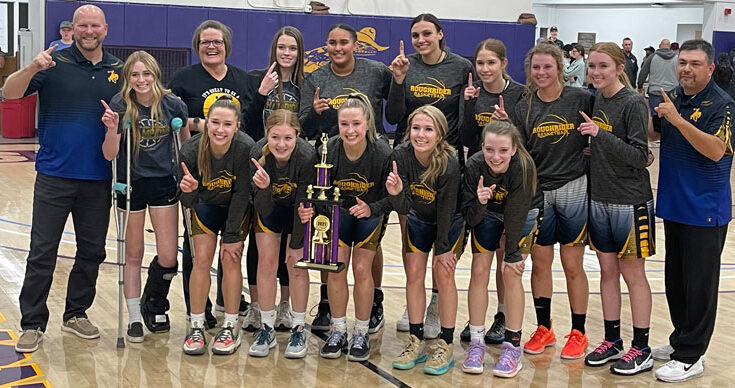 THATCHER – The No. 1 Pima Roughriders girls basketball team rolled over all the competition at the 45th annual Eastern Arizona College Girls Holiday Basketball Tournament and secured the championship trophy with a 56-33 victory over No. 2 Thatcher. Pima’s other wins were 72-31 over Morenci in the semifinals and 92-14 over Willcox in the opening round.

“That was a fun game,” said Pima head coach Roy Corona. “To beat a well-coached, pretty good Thatcher team – that was good.”

Saydee Allred was nearly unstoppable for Pima, as she nailed four dimes on the night and went for a jaw-dropping 28 points to lead all scorers in the championship game. Allred finished the 3-game tournament with 56 points and was selected as its Most Valuable Player.

While the offense shines, it was the Roughriders’ defense that turned the tide of the game.

“We went to the 1-3-1 defense zone and got some steals and made some layups,” Corona said.

Both teams came out hard in the first quarter and battled to a near-stale-mate. However, Thatcher got the edge when Jade Griffin scored off a turnover just before the buzzer to go up 11-9 after one-quarter of play. It would be the Eagles’ last lead of the night.

Pima held Thatcher to just a lone field goal by Griffin in the second quarter and one free throw for a combined 3 total points in the period. Conversely, Pima’s smothering defense forced turnovers that led to fast-break opportunities, and the Roughriders hit for 17 in the quarter for a huge swing and a 26-14 lead at the half.

Both teams played to a stalemate in the third quarter, and the 12-point lead stayed the same. Pima poured it on in the fourth, however, and had 21 points in the quarter to increase its lead. Coach Corona had his bench lined up to come in with a little more than three minutes left to play and later called a time-out to get them into the game. Thatcher head coach Dennis Griffin did so likewise and let the reserve players get some tournament championship action.

“That fourth quarter we scored 21 and that’s what got us the win,” Corona said.

Allred was Ms. Consistent and hit a long ball in each quarter. She also went 10-13 from the foul line and Pima hit 18-25 from the charity stripe for the game.

Ashlynn Chlarson made her presence known on both the offensive and defensive side and disparaged Eagles’ shots on one side while gathering rebounds and putbacks and jumpers on the other. Chlarson finished with 13 points on the night. Other scorers for Pima included Ashlie Sherwood with 9; Aubrie Sherwood with 4, and Ella Wiltbank with 2.

Jade Griffin and Haley Nicholas led Thatcher with 8 points each; followed by Ashlynn Thompson with 7; Olivia Lunt with 6, and Aubrey Pace and Macey Carter with 2 points each.

The 45th annual EAC Girls Holiday Basketball Tournament All-Tournament Team includes three players from Pima and Thatcher, two from Morenci and Fort Thomas, and one each from Safford, Saint David, Duncan, and Willcox.

Tournament MVP Saydee Allred grew up watching the tournament every year and has participated in it three times. (The 2020 tournament was canceled due to COVID-19)

That “hard work” for Allred includes off-hours practices by herself and always hustling during team practice.

The No. 3 Fort Thomas Apaches came back against the No. 4 Morenci Wildcats to secure third place in the tournament with a 72-68 victory.

The Apaches clawed back to go up in the fourth quarter, however, and its pressure defense forced turnovers that led to fast-break opportunities for the streaky quick team. The Fort had a 62-61 lead with 3:34 left in the game.

Morenci then battled back and took back the lead. However, Jasmine Olivar then went on a personal 5-0 run to put Fort Thomas back on top. In the end, Olivar sealed the victory with a free throw at the end of the game to pull out the 72-68 win.

Olivar led the Apaches with 26 points; followed by Alleenna Gilbert with 14; Hailey Hinton with 9; L.J. Rope with 8; Jayla Wilson with 7; Chasinee Stanley with 6, and Tyesha Wilson with 2.

For Morenci, Zenaya Cortez led the way with a game-high 28 points; followed by Mia Ontiveros with 13; Elena Leonard and Delicia Roybal with 8 points each; Devanie Medina with 6, and Julianna Aguilar with 5.

The No. 6 Safford Bulldogs defeated the No. 5 Saint David Tigers 39-29 in the tournament’s only upset.

Lexi Lucas and Brianna Camarena led Safford with 11 points; followed by Gracie Sterns with 7; Ashlyn Schilling with 5; Jaidyn Mortensen with 4, and Ashtyn Schuh with 1 point.

Taylee Jacquez led Saint David with 10 points; followed by Mayla Trejo with 9; Anissa Jacquez with 6, and Halee Deskins and Jasmine Pacheco with 2 points each.

Kiley McGrath led the way for Duncan with 16 points; followed by Emily Kempton with 7; Sadie Hawkins and Aubray Evans with 3 points each, and Kierra Lacey with 1 point.

Willcox was led by Kam Wyatt with 6 points; followed by Mia Mongarro and Maycee Michaels with 5 points each, and Izela Torres, Alyssa Rogers, and Maylee Thompson all had 2 points each. 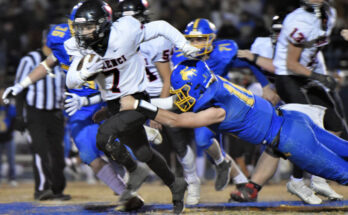 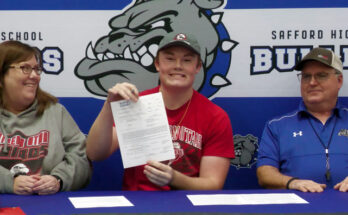 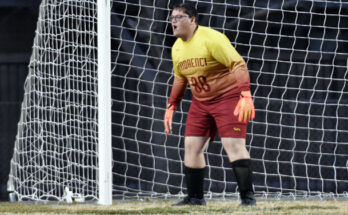