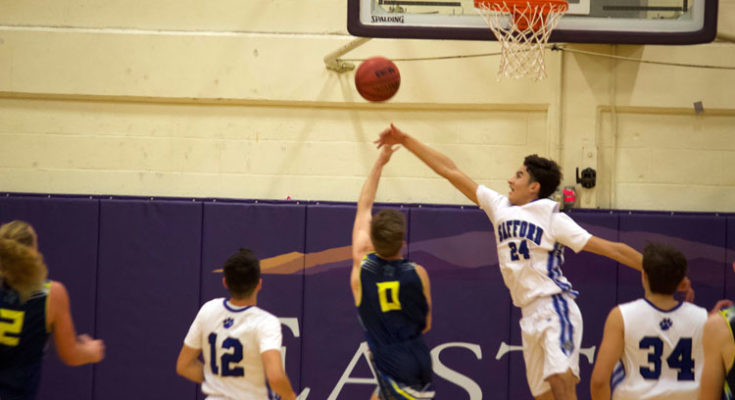 Pima to battle Thatcher for the tournament championship Wednesday night

Pruszynski had missed eight games after suffering a bone contusion in his leg during a loss to Scottsdale Christian Dec. 1. After initially believed to not be available to return until after the Christmas break, Pruszynski, a two-time all tournament team member, said the tournament meant enough to him to fight and come back early.

“I just felt my knee was better and this is a big tournament for me,” Pruszynski said. “I enjoy playing in it, so I decided to come play.”

Pruszynski initially returned in the opening game Monday night, a 60-44 victory over the Fort Thomas Apaches. On Tuesday night, he was targeted by his teammates numerous times and scored 18 points, with 10 coming from the charity stripe.

While a spectator could look at the free throw disparity (Safford shot 7-11 from the charity stripe) and think that the game was called one-sided, it actually was evenly called and 14 of Pima’s 31 attempts were on intentional fouls at the end of the game. Overall, Pima made just 19 foul shots of those 31 opportunities.

“That was a grind-out type of a win,” Pima head coach Cliff Thompson said. “I’m proud of my team for playing hard defense. I don’t know if we’re playing real good defense but we are playing extremely hard and we’re getting better.”

The Roughriders came out strong and held a good offensive Safford team to just single digits in the first period and second periods.

After Pima opened the scoring with a shot by Tim Salyer and a free throw by Pruszynski, Safford’s Drew Cochran (last year’s tournament MVP) gave Safford its only lead of the half, 4-3, on consecutive buckets. Cochran would finish with 13 points on the night, but the Bulldogs wouldn’t retake the lead until the third period.

Judd scored 7 of his game-high 20 points in the first period and would have had more if Jejdrique Chavez hadn’t swatted his layup attempt like a volleyball. However, Judd found his range from deep with two 3’s in the first half and Pima went into the locker room with a 22-17 lead.

Safford can score points in bunches, however, and the Bulldogs came back at the beginning of the third period through the use of their press defense and the hot hands of Dom Gutierrez and Andrew Smith, who nailed a 3-pointer to give Safford a 25-24 lead with about 4:35 left in the third period.

Pima didn’t roll over, however, and came back with a 9-3 run the last half of the third period to go into the fourth period with the lead, 33-28.

A small window of time in the middle of the fourth period sealed Safford’s fate. After a Gutierrez bucket brought the score within 3 points, 39-36, Pruszynski hit 1-2 from the foul line and Gutierrez was called for an offensive foul. Judd then nailed a clutch 3-pointer and hustled on defense to dive after a loose ball and get the time-out call to keep the possession in Pima’s hands. Pruszynski then hit two more free throws and suddenly Pima was up 10, 46-36, with just 2:25 left in the game.

Safford went into panic mode and even after Chavez (14 points) hit a 3-pointer and Smith (8 points) scored on what appeared to be an NBA-continuation and-1 3-point play to cut Pima’s lead to just 5 points, it seemed the Bulldogs were playing from a desperation feeling.

Pima hit 12-20 from the free-throw line in the fourth period to seal the game and move onto the championship game Wednesday night with the 53-45 victory over Safford.

Pima will face Thatcher, which beat Morenci 64-50 in the other semifinal game earlier in the night.

“Hopefully, we can continue to keep getting better,” Thompson said. “Thatcher has been playing pretty well lately. They like to fast break and they can score. But our thing is we play defense, and that’s the main thing that we kind of pride ourselves on . . . But we’ve got to get better offensively and a little bit better defensively as well. They’re an extremely talented team – a deep team – and I hope we’ve got enough to hang with them.”

After battling with Safford’s Cochran all night, Pruszynski will go up against Thatcher’s Cole Motes on Wednesday. Motes was virtually unstoppable in Thatcher’s victory over Morenci, scoring a game-high 21 points a variety of ways, including offensive rebound putbacks, mid-range jumpers, long jump shots, low-post moves and on the fast break. Pruszynski hopes to rise to the challenge and help his team to victory.

“I’m just going to go out there and play as hard as I can and see what happens,” he said.