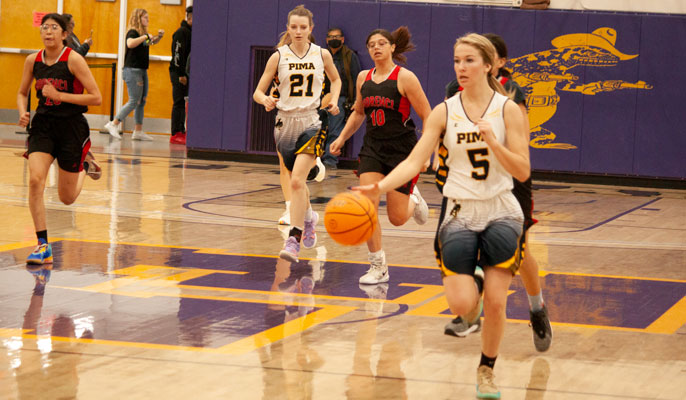 THATCHER – The No. 1 Pima Roughriders had another blowout win on Monday, and the No. 2 Thatcher Eagles came back against No. 3 Fort Thomas to put the top-two ranked teams in the tournament’s championship game Tuesday night.

Here is a rundown of the day’s contests:

The Tigers roared and the Cowgirls jumped as St. David held Willcox to single-digit scoring in each quarter.

Anissa Jacquez led St. David with 18 points; followed by Mayla Trejo with 13; Halee Deskins and Jasmine Pacheco with 8 points each; Taylee Jacquez with 7, and Regan Haynie and Gracey Crockett with 2 points each.

Willcox was led by Kam Wyatt and Madison Bennett with 5 points each; followed by Maylee Thompson with 4, and Mia Mongarro and Maybe Michaels with 3 points each.

The Safford Bulldogs held the Duncan Wildkats scoreless in the first quarter on their way to an 18-7 halftime lead. The Bulldogs scored in double figures in their last three quarters.

Brianna Camarena led Safford with 13 points; followed by Brynzee Hansen with 11; Lexi Lucas with 9; Ashlyn Schilling with 4, and Gracie Sterns and Ashtyn Schuh with 2 points each.

Kiley McGrath led Duncan with 9 points; followed by Emily Kempton and Sadie Hawkins with 4 points each; Aubray Evans with 3, Rachel Sumner with 2, and Kaylee Kempton with 1.

The Thatcher Eagles came back in the fourth quarter behind the strong play and 10 points from Olivia Lunt to retake the lead and hold off the Apaches.

Thatcher point guard Haley Nicholas went off for 29 points; she was followed by Lunt with 16; Ashlyn Thompson with 10; Jade Griffin with 8, and Jaiden Davis with 2.

The Pima Roughriders broke the tournament record for most 3-pointers by a team by nailing 11 in the contest to propel Pima to the Championship game Tuesday against Thatcher.

Ashlie Sherwood led the balanced Roughrider attack with 15 points; followed by Saydee Allred and Ashlynn Chlarson with 13 points each; Aubrie Sherwood with 12; Jayci McClain with 10; Ella Wiltbank with 6, and Samantha Pippo with 3.

Morenci was led by Zenaya Cortez with 11 points; followed by Elena Leonard with 8; Delicia Roybal with 6, and Mia Ontiveros, Devanie Medina, and Keriah Chee all had 2 points each.

Pima will next play Thatcher in a battle of top-ranked seeds for the tournament championship on Tuesday, Dec. 21, at 7:30 p.m. Fort Thomas will next play Morenci in the 3rd Place game on Dec. 21 at 4:30 p.m.