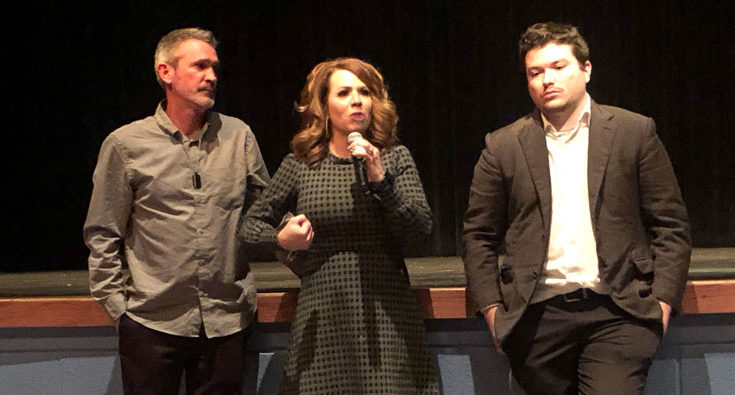 Jon Johnson Photo/Gila Herald: From left, Jason and Maria Kouts and director/producer Joe Carlini discuss “Josiah” during a question and answer session after the screening.

SAFFORD – On the two-year anniversary of his death, a near-capacity crowd welcomed the world premiere of “Josiah” at the David M. Player Center for the Arts on Thursday, as the raw, unadulterated story of Josiah Kouts was captured in a documentary film by director/producer Joe Carlini, of Hollywood, Calif.

Josiah is the son of Safford Mayor Jason Kouts and his wife, Maria, and was found deceased in his bedroom in the afternoon of Jan. 23, 2018, after he suffered an overdose of heroin laced with fentanyl.

The film, which took roughly 18 months to make, featured interviews of family and friends and used a large helping of home videos and pictures to document Josiah’s life, which shined brightly before being snuffed out at the hands of opiate addiction.

Prior to the start of the film, the Kouts family was presented with the Pride of Safford Award from Safford City Councilor Chris Taylor, who is a former addiction recovery specialist himself.

Upon accepting the award, Maria asked those in attendance to stand if drugs had affected them or a person they loved and nearly all there stood.

“This award is not for me,” Maria said. “This award is for us. You are among the strongest, most resilient people there are. You know that most people hide in shame when it comes to this thing that we call addiction. They hide it, but not you, not us. I am so proud to be a member of the Gila Valley because of people just like you.”

In addition to the very personal story from the Kouts family, the film also presents an overall picture of opiate addiction and has interviews with those who have managed to overcome their addictions – sometimes after multiple overdoses – and support group members who are continually fighting for the lives of their loved ones.

During the totality of the story, the audience is brought along on a roller coaster ride celebrating Josiah’s life and those he touched. Those in attendance experienced the highs of his “all-American” upbringing and joy, as well as the extreme low that ended his marriage and, ultimately, his life. Pictures of Josiah lying on the floor of his bedroom deceased brought home the message near the end of the film in a stark, and unwavering fashion.

Jason said he hadn’t seen the film prior to the premiere and that the pictures of his son at the end nearly forced him to leave.

“The death pictures just killed me,” he said. “I was ready to get up walk out of here. That’s real, and that’s what happens. My whole story is (if there is) one person in Graham County that I touched and completely changed, I’ll take it. And you know what, then we’re going to try for two.”

The death of their son has led Jason and Maria on a quest to bring more facilities to Graham County and they have called for the construction of a local drug rehabilitation center. Additionally, along with The River Church, they are looking at opening the Josiah House, which will be a faith-based facility that will serve 12 people at a time regardless of their sex and be free to those utilizing its services. Jason also said he welcomes a rehab facility to be built next to his home because those addicted need to be welcomed back into the community and not shunned or placed on the outskirts.

“I would really like to see an actual rehab here,” he said. “Drug people aren’t bad people. They need a facility. We don’t need to be sending them to Tucson or Phoenix. We need to say to them, ‘we’ve got your back.’”

“Josiah said he could not come back here.”

Maria agreed and said she believed the Gila Valley could be the forerunner to lifting the shame associated with drug addiction.

“This is the first step in breaking that stigma,” Maria said. “The first thing that we need to do is to pull our stories out from under the rug because anything that is hidden does not heal. We have these ODs so much because it’s all hidden.”

Carlini said he hopes to have an encore screening of “Josiah” in Safford in the Fall and will next take it for screenings in San Diego, Minnesota, Los Angeles, Phoenix, and Denver as well as attempt to have it available on streaming services such as Amazon, Apple TV, and Netflix as well as film festivals and schools and treatment facilities.

Carlini said where he lives in Hollywood he sees drug addicts and homeless everywhere he goes. And while most people try to ignore them, he realized they were all once someone’s family and influenced him to make the film.

“That’s why I thought it was important to show addicts who overcame and are survivors who changed their lives and are now spreading their experiences to other addicts and helping them overcome,” he said. “That’s where it starts with people just being able to open up and say these are the demons that I’m dealing with . . . Doing this film made me open my eyes to a lot of things.”

DVDs of the movie as well as Maria’s book, “Josiah: One Family’s Journey of Being Broken Together,” were sold in the lobby during and after the film. DVDs are also available to purchase from The River Community Church during the workweek at 1726 S. 1st. Ave. See more about the church at www.TheRiverMinistries.net.

To purchase the book on Amazon click here and to purchase it on Barnes and Noble click here. The book is currently the No. 1 release on Amazon in Drug Dependency Recovery.