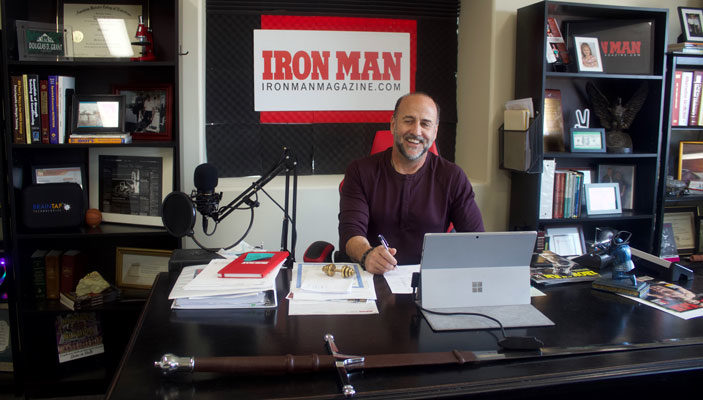 PIMA – Pima, Arizona; known for its roping arena, retro-style mom and pop fast-food joint, and its top-notch high school basketball program, will soon also be known as the home to a world-class nutrition supplemental production facility and the headquarters of the legendary Iron Man Magazine.

Like the fabled Phoenix, Doug Grant and his new 12,000-square-foot facility, Optimal Health Centre, have risen from the ashes of the old Graco car lot to be a beacon of what can be achieved through public and private partnership. With the new facility, the number of employees has increased from 12 in 2014 to 30 on staff at the building and another 12 who operate remotely. The first business, Optimal Health Systems (OHS) was initially formed by Grant in 1997 and first moved to Pima in 2003. Products created by OHS are used by the average consumer but is also used by a number of professional sports organizations, according to Grant.

“Our goal for many years has been to create programs and a place for people to come and learn about health and improve their health no matter where they are at in life,” Grant said.

The seed of the new facility was first planted when the Pima Town Council unanimously voted to purchase the lot at its Oct. 3, 2017 meeting. It was the council’s forward-thinking – spearheaded by Pima Town Manager Sean Lewis – and determination combined with Grant’s business acumen that shaped the new facility, which not only houses the production and distribution facility for Optimal Health Systems, but also is the home to its sister business Gains In Bulk, and the aforementioned world headquarters for Iron Man Magazine.

The town of Pima built the building and used local labor for all aspects of construction. In December, the town received a $375,000 check from the Graham County Electric Cooperative through a rural economic development loan and grant fund through the United States Department of Agriculture.

“In a lot of ways it helps us, but, more importantly, it helps the business,” said Pima Town Manager Sean Lewis at the time. “We wouldn’t have been able to do as much work on the building as we did without this loan. So, if we didn’t have this loan, we should have put up the structure and then it would have been on the business to finish it, which would have put them in a financial hardship and would have made this like a three-year program.”

As it is, OHS still had to put in roughly $65,000 of its own money to finish the building to its specifications to date, according to Grant.

Upon entering the building, visitors are greeted by friendly receptionists in the retail section of the building, which features various products on floating shelves. But the real action is in the back, where a large receiving area is the first step to the product.

Upon delivery, all raw materials are stored in a quarantined cage area that is controlled by an electric locking mechanism. Prior to proceeding to the next step, the materials are subjected to a three-phase testing system to ensure quality. The first step is the certification of the materials on arrival. A sample is then taken and tested on site to make sure the material is what the labels say it is and that there are no other additives or micro-organisms and such. Following that process, the sample is sent out to another laboratory to confirm the results. If confirmation is made, the product is then moved into a separate caged section and labeled ready for production.

“We’re one of the few companies in the nation that actually makes our products from scratch,” Grant said. “We make nutritional formulas, nutritional supplements and we make them from scratch.”

OHS also has a partner lab in Washington, which does an amount of blending the raw materials as well.

When preparing a product, the raw materials are taken into a room that serves kind of like an airlock and are placed on one half. The worker leaves and then a different worker in full sanitary garb comes from inside a pressurized “clean room” to retrieve the materials.

The raw materials are then processed to make the various supplements in the clean room, which has its own ventilation system and adheres to the strictest of testing standards. In one section a specialized machine which had to be delivered and set up by the manufacturer makes one-of-a-kind supplements specifically created for each individual user. Grant said that machine alone actually cost more than the entire building.

After the products are bottled, they go into another airlock-type of room and the reverse process happens with the clean room employee leaving them and after they exit another employee from the stock area collects them and places them on shelves ready to be shipped. OHS is one of if not the largest user of the Pima location of the United States Post Office and uses other shippers as well.

The production facility makes product for OHS as well as Gains in Bulk, which is another arm of the company more dedicated to athletes and weightlifters.

Upstairs in the facility is where one will find the corporate offices and sales floor, as well as the headquarters for Iron Man Magazine.

In an open-office environment, workers have desks that can rise to a level and treadmills to keep in shape while working an office job.

The upstairs portion also has the design area for Iron Man Magazine, which will come out with its first issue April 16 since Grant and his business partner purchased it. Iron Man Magazine was first founded in 1936 and has been an innovator in its class over the many years in publication.

The magazine is an icon in the workout world and Grant has turned the business on its heels by insisting that every model that poses for the magazine be free of performance-enhancing drugs.

Also located upstairs is a conference room and Grant’s shared two-person office that also has office space for his wife, Hillary. The office also doubles as a podcasting studio and Grant said he has already recorded a couple of interviews for a podcast, which will launch in conjunction with the magazine.

Grant said he was scheduled to an interview with boxer Floyd Mayweather Jr. on Wednesday and that they would then travel to Las Vegas to do a photo shoot with him for the August issue of Iron Man Magazine.