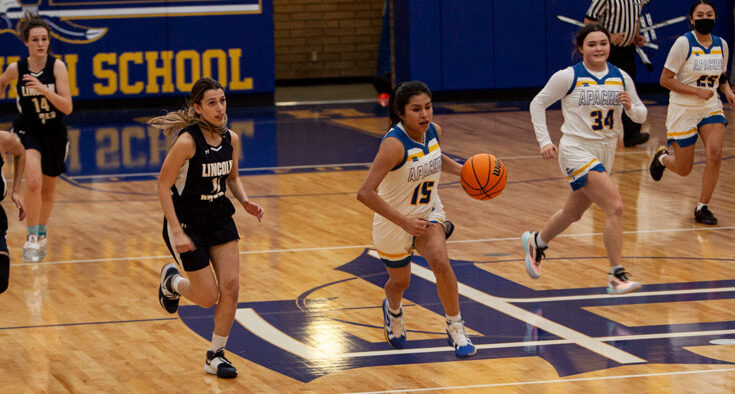 Jon Johnson File Photo/Gila Herald: Jasmine Olivar (15) leads a fast break for the Apaches against the Lincoln Prep Lightning. Olivar was chosen as the 1A Conference Offensive Player of the Year.

FORT THOMAS – The Fort Thomas Apaches’ sensational sophomore Jasmine Olivar has been named the 1A Conference Offensive Player of the Year.

Olivar averaged 16.1 points, 6.7 rebounds, and 4.1 assists per game for her sophomore season at Fort Thomas and led the Apaches to a 1A South Region Championship and State Runner-ups.

The accolades follow those from Olivar’s debut freshman season, where she earned 1A Conference Player of the Year in 2021 and the Apaches were the State Champions.

With two more years of high school to go, she has already lived out many players’ dream sequences. Olivar is continuing her basketball season by playing with Arizona Elite Girls Basketball out of Phoenix.

Joining Olivar on the 1A All-Conference 1st-Team for the second year in a row is Chasinee Stanley – the dead-shot from the corner. Stanley averaged 9.3 points, 3.9 rebounds, 2.7 assists, and 2.8 steals per game in her senior year for the Apaches.

Alleenna Gilbert and Hailey Hinton, of Fort Thomas, and Kiley McGrath, of Duncan, were given Honorable Mentions.

Olivia Lunt, a senior, from Thatcher,  was chosen for the 3A All-Conference 1st-Team for the girls. Lunt finished the season averaging 13.3 points, 8.3 rebounds, 1.3 steals, and 1.2 blocks per game.

Bradley Curtis, junior, from Thatcher, was chosen for the 3A All-Conference 1st-Team for the boys. Curtis led the Eagles and averaged 20.4 points, 10 rebounds, 1.6 assists, 1.6 steals, and 1 block per game. Thatcher lost a close game to overall No. 1 Valley Christian in the state quarterfinals 53-59. Valley Christian went on to win the 3A State Championship over Coolidge, 61-56.

Brandon Napier, junior, from Thatcher, was given an Honorable Mention. Napier averaged 11.2 points, 3.6 rebounds, 3 assists, and 1.8 steals per game.