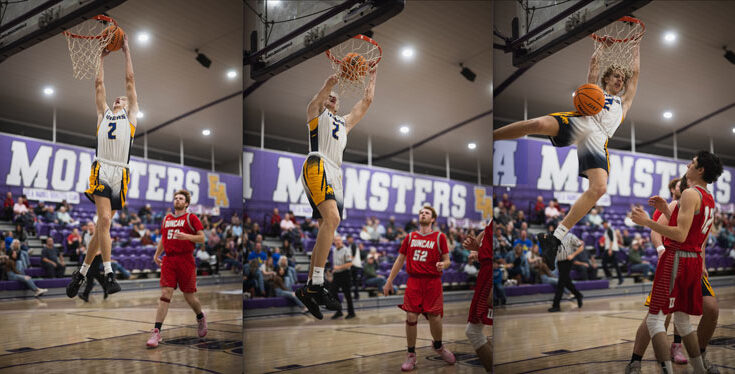 Steve Carter Photos/Special to the Gila Herald: Grant Ashby dunks in this collage as the Pima Roughriders dispatched the Duncan Wildkats 75-33 on the opening day of the 59th annual EA Boys Holiday Basketball Tournament on Tuesday.

THATCHER – The first day of the 59th annual EA Boys Holiday Basketball Tournament is in the books and, as if scripted by a hack sports writer, everything went exactly as planned.

From those managing the ticket office and concessions to the patronage of basketball fans young and old, former players, and coaches, and the hospitality of the host EA, the tournament evokes a sense of nostalgia and excitement and the feeling appeared to be contagious as even in not-so-close games the crowd was taken in by the action.

And even with the addition of the kids streaming the games to an online audience, the whole event seemed familiar in a good way.

St. David turned a 3-point lead after one period into a double-digit advantage by halftime, 32-21. However, St. Johns returned the favor and outscored the Tigers 19-8 in the third to tie the game up at 40-40.

St. David poured it on in the fourth, going for 23 points with help from a couple of long balls from Matteo Carrafa, who finished with 14 points on the night.

It was the senior duo of Koy and Kydin Richardson who led the Tigers with 18 points each hitting shots both inside and outside. Other scorers for St. David included Paul Parker with 11 and Ryan Gooding with 2.

Gabe Alford led the way for St. Johns with 15 points, followed by Jordan Winters with 13, Braeden Wall with 11, Jay Wahl with 8, and Tristen Mineer with 4.

The Pima versus Duncan game was never in question as the Wildkats were simply outmatched as the Roughriders ran them out of the gym, 75-33.

Pima utilized its running big men like Seth Russell (17 points) and Garrett Curtis (14 points) and Grant Ashby (12 points), and a lockdown defense that allowed only 3 points in the second period to open up an unsurmountable 47-13 halftime lead.

Sleek guard Coy Miller (12 points) nailed a couple from deep and had a nifty one-handed layup as the kids like to do these days.

Continuing Pima mountain of players, reserve center Nathan Skiba poured in 9 points, while other scorers included Riley Alder with 7, and Leland Thompson and Wyatt Wiltbank with 2 points each.

For Duncan, Brody Waters led the way with 13 points, followed by Benjamin Harris and Taegyn Jensen with 5 points each, Artie Lemmons with 4, and Isaac Harris, Tim Lunt, and Logan Basteen all with 2 points each.

It was a tale of two quarters in the matchup between Safford and Morenci as the Bulldogs could only muster 6 points in the first period, giving Morenci the 13-6 advantage. But the roles were reversed in the second as Safford had a 23-point surge behind Jojo Ruelas (16 points) and Nathaniel Quintero (14 points) that helped open up a 29-17 lead at halftime.

But Tristen Sanchez seemingly willed his team back in the game himself in the third period as he scored 16 of the team’s 18 points in the third to cut Safford’s lead to 41-35 upon entering the final period of play. Sanchez finished with a game-high 29 points.

Sanchez got some help in the fourth period as Morenci cut Safford’s lead to just 2 points, 51-49, with 3:05 left in the game. Daylen Johnson finished with 11 points for the Wildcats, followed by Derek Saenz with 6, Noah Chavez with 3, and Joey Seballos and Derick Lytle with 2 points each.

While Morenci’s full-court press helped them get back into the game in the second half, Safford also found success breaking it with big man Brayden Bowman reaping the benefits. Bowman finished with 15 points and was briefly knocked out of the game with a bloodied nose.

Safford broke the press when it needed it the most and held on for the 61-53 win. Other scorers included Cole Yentsch with 10, and Izaiah Alvarado, C. Goodman, and Jeremiah Garcia all with 2 points each.

Safford head coach Danny Smith said he thought it was a good experience and growth for his team.

“They had a couple of things that they did that were totally player-led at the end in the fourth quarter which is incredible growth – their communication has gotten so much better,” Smith said. “That’s one of the coolest things about it.”

Safford will next play Pima in the winner’s bracket on Wednesday, Dec. 28, starting at 8 p.m.

“They’re playing super hard and we just have to execute better and show a little bit more poise,” Smith said.

When the initial seedings for the tournament came out, Thatcher was given a 5 seed and placed in the upper bracket. They were then re-seeded at 2 and put in the lower bracket (thereby avoiding No.1-seed Pima until a potential championship match).

The re-seeding appeared to correct the initial blight (in my opinion but Thatcher is the defending champion and is a top 3A team in this tournament with lower-conference schools and certainly could have made an argument for the overall No. 1 seed).

However, the Eagles seemed moved to prove their worthiness and took it out on the Apaches, who fought hard but were hopelessly outmatched and had no answer whatsoever for Thatcher’s Bradley Curtis. Curtis is already making waves for MVP as he scored 30 points in the opening game while resting in the fourth period.

Curtis was just on another level than his opponents, swooping over as he sailed to the rim time after time for close buckets. He was helped offensively by Cody Jones with 9 points, Landon Duncan with 8, Brett Jones with 7, Brandon Napier with 6, Christian Carter with 4, and Bryce Larson, Wyatt Nicholas, Daniel Jones, and Jadin Palmer with 2 points each.

Michael Stanley had a couple of 3’s for The Fort’s only field goals in the first, but the long ball couldn’t keep the Apaches in the game. Jayshawn Rambler led the way for Fort Thomas with 13 points, followed by Stanley with 12, Channing Wilson with 5, Carmelo Robertson with 4, Justin Kitcheyan with 3, Darius Miles, and Kyle Secody with 2 points each.

Fort Thomas will next play St. Johns on Wednesday, Dec. 28, starting at 1 p.m.

Check out our Facebook page for photos from Day 1.