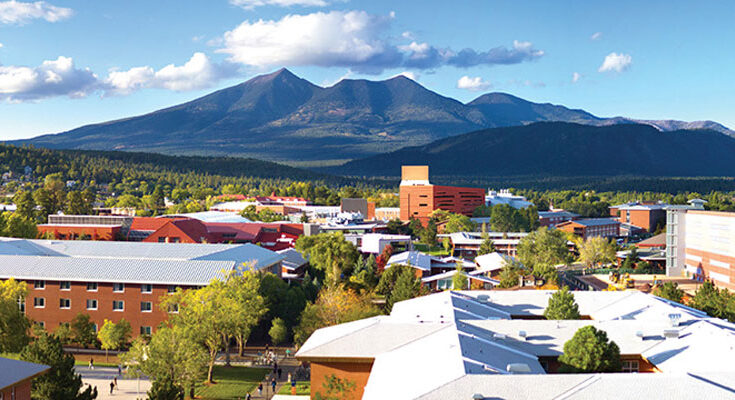 Photo Courtesy NAU: The program, which offers tuition-free education for first-time undergraduate students at any of NAU’s sites, reflects the university’s longstanding commitment to Native American and Indigenous students.

FLAGSTAFF – Honoring its longstanding commitment to Native American students and communities, Northern Arizona University today announced it would provide full tuition coverage for members of Arizona’s 22 federally recognized tribes beginning in fall 2023 through an expansion to the Access2Excellence initiative.

Ensuring access to an affordable, high-quality education is the foundation of NAU’s vision. The Access2Excellence (A2E) initiative, announced earlier this year, is a cornerstone of that work, providing full tuition coverage for all new first-time undergraduate students with a family income of $65,000/year or less beginning in fall 2023.

This extension of A2E for members of Arizona’s 22 federally recognized tribes reflects NAU’s strategic priority of being the nation’s leading university serving Indigenous Peoples. Now, NAU will ensure tuition coverage is not dependent on family income level and will apply to all new and transfer students, including those who live outside of Arizona but are members of the 22 Arizona tribes.

“At NAU, we pride ourselves on our service to Native American students and the communities they represent,” said NAU President José Luis Cruz Rivera. “Extending A2E eligibility for our Arizona tribal members is an important step as we plant seeds for the success of future generations of Native American students at NAU. My thanks to our team and our engaged tribal partners who work every day to make higher education accessible and affordable to all.”

NAU is creating pathways to enhance access to higher education for Native American students, building on a foundation that has placed the university at the forefront of institutions across the nation in awarding degrees to Indigenous students. NAU has been recognized as a leader in many fields, including:

“Last year on Indigenous Peoples Day, President Cruz Rivera announced a redoubling of our efforts to better partner with and serve Indigenous communities in Arizona by expanding access to Native American students and supporting their success,” said Ann Marie Chischilly, Vice President for Native American Initiatives. “Today’s announcement follows through on that commitment. I am honored that NAU is so focused on advancing our work as an Indigenous-serving institution for the betterment of the native nations of Arizona and beyond.

NAU offers a robust and intentional community of support for Native American and Indigenous students who entrust their educational journey to the university. From the Native American Cultural Center, a centrally located cultural and programming space that serves as a home away from home for Indigenous students on campus, to the Office of Indigenous Student Success and the newly launched Indigenous Peoples Living-Learning Community, NAU is committed to providing a supportive environment that complements its exceptional academic programs, fueling students’ economic mobility and social impact.

The university is uniquely positioned to set the standard for Native American student access and success in higher education. NAU’s Flagstaff Mountain Campus is located in close proximity to 11 tribal nations, including the Navajo Nation, which has the largest Native American population in the United States, and the university’s footprint in more than 20 statewide locations offers many access points to meet students where they live and learn.

“I’m pleased to hear that NAU is extending the Access to Excellence program to members of all 22 federally recognized Native American Tribes in Arizona,” said LuAnn Leonard, Hopi-Tohono O’odham, member of the NAU Native American Advisory Board and former member of the Arizona Board of Regents. “This strategic commitment will enable and encourage more Hopi students as well as other Arizona tribal students to earn their college degree at NAU and use their skills to strengthen our Native communities.”

“On the Navajo Nation, thousands of students graduate from high school each year. For many, going to college is not affordable,” said Jonathan Nez, President of Navajo Nation, NAU alumnus, and member of the NAU Native American Advisory Board. “With NAU extending its Access to Excellence program to Arizona’s 22 federally recognized tribal nations, Navajo students will be encouraged to know that they can go to NAU without having to worry about how they will pay for tuition.”

Details about A2E for members of Arizona’s 22 federally recognized tribes can be found online at nau.edu/a2e. As NAU implements the program, the university will first use tuition scholarships offered at the time of admission, and any other federal grant program, such as the Pell, and the remaining costs will be funded by NAU. Additional aid like tribal scholarships will not be used for tuition costs and can be applied instead for other costs of attending college, like housing, books, and other fees—ensuring Native American students eligible for this program have access to all opportunities to make their NAU education affordable.