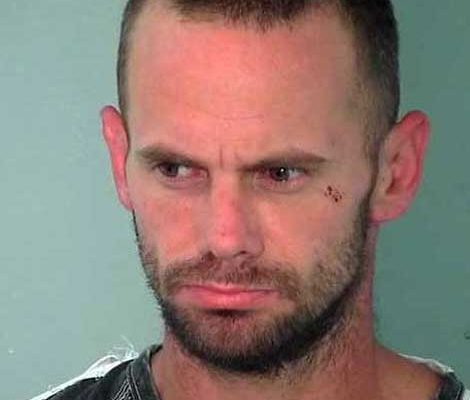 Contributed Photo/Courtesy GCSO: Jerry Lee Morris found himself back in jail after allegedly brandishing a nearly foot-long knife to a group of bicyclists.

SAFFORD – Jerry Lee Morris, 34, just can’t seem to stay out of jail. Morris has been jailed at least six times in the past six months on a variety of charges from burglary and theft, to disorderly conduct and domestic issues with his brothers, who also spend a fair amount of time behind bars. Morris had just posted a bond regarding a disorderly conduct/domestic violence charge and was released March 3. He was out for less than a week before being jailed again.

In the most recent stint, Morris was accused of brandishing an 11-inch knife to a group of bicyclists who were looking for a hotel room Friday night near the area of U.S. Highway 70 and Entertainment Avenue.

According to a Safford Police report, the victims said they came upon Morris and a woman and that Morris was mumbling to himself. He then approached the group of bicyclists and raised his shirt to display a large blade, according to victim statements.

Officers responded to the area at about 5:42 p.m. and shortly after located Morris in the area of U.S. Highway 70 and 900 E. Hollywood Rd.

Morris, who is known to have abused stimulants and perhaps have a mental illness spoke erratically to the officer as the officer removed the blade from Morris’ waistband and placed him in handcuffs.

Morris allegedly admitted to showing the blade to the bicyclists but said he didn’t threaten them with it but rather wanted to show it off because he thought it looked so nice.

On Sept. 28, 2017, Morris was booked into the jail for burglary in the second degree and theft after allegedly entering his neighbor’s residence and stealing beer out of the refrigerator. During that arrest, he threatened officers with bodily harm and acted so erratically and belligerent that he had to be placed in a restraint chair by detention officers at the jail.

On Nov. 13, 2017, Morris was booked into the jail for disorderly conduct/domestic violence after having a verbal argument with his brother over drugs. At that time, Morris appeared to be under the influence of some sort of stimulant and was found holding a handful of bread and a jar of mayonnaise that he refused to let go.

Morris would not cooperate with authorities and again had to be placed into a restraint chair at the jail.

He was also booked into the jail for disorderly conduct Feb. 12, after getting into an argument with his brother and his brother’s girlfriend.