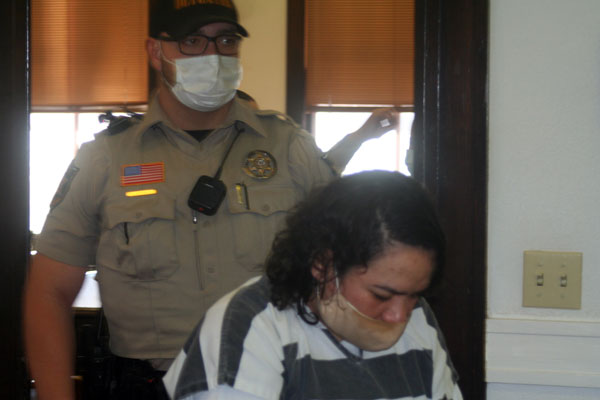 Walt Mares Photo/Gila Herald: Convicted murderer Georgina Misener is escorted from the Greenlee County Superior Courtroom after being sentenced to 33.75 years in Arizona State Prison. The sentencing occurred Jan. 5 before Superior Court Judge Monica L. Stauffer. Georgina was convicted of taking part of a conspiracy in which her ex-husband Matthew Misener was ambushed and killed on a stretch of highway between Clifton and Morenci.

CLIFTON – Greenlee County Superior Court Judge Monica L. Stauffer was adamant. The word that stuck out in the many notes she took during the sentencing hearing was “manipulative.” She also said Georgina Misener “is a danger to society.”

The judge then ordered that Georgina Misener, 34, be sent to prison for her part in the murder of her ex-husband Matthew Misener.

The sentencing took place on Jan. 5 in Greenlee County Superior Court. Stauffer sentenced Misener to 33.75 years in the Arizona State Prison. She was sentenced on two counts: murder in the second degree under accomplice liability for which Misener received 25 years and 8.75 years for conspiracy to commit aggravated assault. The sentences are to run consecutively, thus the 33.75 years.

The murder occurred early morning in mid-February 2020 on a stretch of highway between Clifton and Morenci. Eduardo Montano Jr., 36, of Tucson, has already been convicted in Matthew Misener’s shooting death. He is also serving a 33.75 prison term.

Montano Jr., 36, of Tucson, previously pleaded guilty and was sentenced to a stipulated term of 33.75 years in prison. According to his plea agreement, Montano agreed to be sentenced to the maximum term of 25 years on a charge of murder in the second degree and a consecutive sentence of an aggravated term of 8.75 years on a charge of aggravated assault for a total of 33.75 years in prison.

About 14 members of the deceased’s family and friends attended the Jan. 5 hearing. Despite wearing protective facemasks, those who spoke were heard loud and clear. No one raised his or her voice but the deep emotion they felt was well conveyed.

“What he was to us is impossible to describe,” said Ray Misener Sr., the victim’s father. He spoke of attending his son’s high school football games and wrestling matches. He told of how close he and his son were. “Now he’s gone and I’ll never be able to hug him again.”

The hearing began with Rebecca Johnson, Georgina Misener’s court-appointed attorney, addressing the court. She spoke for about half an hour and spoke of mitigating circumstances that led to Misener’s troubles, including mental health issues and a difficult childhood. Johnson said “mental instability” was also a factor in her client’s life.

She suggested a type of probation in which Misener would receive counseling. She said her client was already undergoing counseling. She also pointed out that mental health facilities in the Arizona State Prison system were “greatly lacking”

When Johnson finished her comments, Georgina was allowed to speak. Her voice was very difficult to understand as she sobbed and cried during the 15 minutes she spoke.  She denied being part of a conspiracy to murder her ex-husband. She said she was not aware that her boyfriend, Montano, was planning to kill Matthew.

Georgina continued weeping heavily while she spoke and created a small mound of tear-soaked tissues on the desktop in front of her.

Greenlee County Attorney Jeremy Ford presented a vast amount of evidence that sharply contradicted Georgina’s claim of not being involved in the murder. Evidence included cell phone calls between her and Montano that left little doubt there was a conspiracy to eliminate Matthew from her life.

During his delivery, Ford referred to Georgina as “a danger to society.”

At the center of a dispute between the Miseners was the custody of their small children. Matthew Misener was due to go to a custody hearing in Greenlee County Superior Court but before he could he was ambushed by Montano on a stretch of highway between Clifton and Morenci.

During the sentencing hearing, a sister of Matthew’s described with a tear-choked voice how she saw her brother after he was killed. She recalled seeing three bullet holes in the side of his head.

Johnson said of Georgina’s actions that “love and devotion to her children was behind it.”

That is not at all how some members of the Misener family saw things. Those who spoke to the court said they began to see Georgina as “manipulative.” More than one family member spoke of how “she was very much part of the family. We accepted her.”

Some of the family members said she cared more about herself than she did for her children. “It was all about her,” one said. “She really didn’t care about the kids. It was all about what she wanted.”

Some incidents occurred in which the family learned she was not telling the truth about certain situations. About a year before the murder, Georgina told them she had cancer, which she did not. One family member said Georgina was apparently seeking sympathy and her cancer claim was a means to manipulate the family into feeling sorry for her.

Other instances were recounted in which those who spoke described Georgina as manipulative. That was a key part of Ford’s case and other examples of manipulation were given.

When Judge Stauffer spoke near the end of the hearing she said when she reviewed notes she took the word “manipulative” stood out several times.  She said that much of what was presented by the defense as mitigating circumstances did not carry much or “any weight.”

That included a letter the court received from Montano – who actually shot and killed Matthew – saying he acted alone in Matthew Misener’s murder.

The judge agreed with prosecutor Ford’s earlier comment. She told Georgina, “You are a danger to society.”