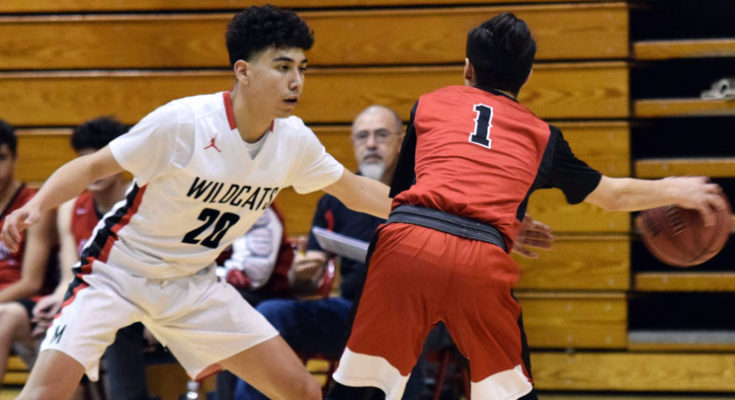 MORENCI – The Morenci Wildcats earned the state’s 2A top ranking following the Martin Luther King Jr. Holiday break, but went 1-3 afterward, topping the No. 27 Pumas 65-36 in Bisbee on Jan. 22, and succumbing to the No. 5 Thatcher Eagles 72-69 on Jan. 25 and 54-53 to the New Mexico Bayard Cobre Indians on Jan. 26, both in Wildcat Memorial Gymnasium.

Three seniors and two sophomores start, a senior and freshman make up the 7-man rotation, and the roster is filled by four sophomores whose playing time remains largely on the junior varsity level. The 2018 roster lost two members to graduation, a starter and reserve, but three others, a senior, junior, and sophomore with varsity experience did not return.

On the verge of a win with 12 seconds remaining and a 53-52 edge, a missed free throw and a pair of made visitor free throws by senior Gabe Ortiz had the Wildcats trailing by one six seconds later. A final possession and hope for a win went as the half-court inbounds pass sailed away from the outstretched hands of the intended recipient.

The Indians led from the onset after both teams missed a pair of field goal attempts, a Jimmy Rico 3-pointer with 1:35 elapsed kept the lead until a Chavez 3-pointer gave Morenci its’ initial lead, 21-20, with 3:42 left in the second period. The Wildcats led 27-26 at halftime and 39-38 heading into the fourth period.

The senior-laden ‘Land of Enchantment’ team exited Morenci with a 7-10 overall record.

Morenci connected on a pair of 3-pointers by Leonard and Hayes to cut the deficit to nine, and 6-7 free throws, 2-3 by Leonard and 4-4 by Olmsted, to pare it down to three with 24 seconds left. Two different Wildcats attempted three long distance shots, none connected. Morenci’s 3-point shooting was less than the 40 percent of the closing minute-and-a-half during the game, or “not very good,” head coach Patrick Hepper said.

The Wildcats scored in double figures through the first three quarters while the Pumas did so in only one. Morenci led 20-7 after the first period, 40-14 at halftime, and 60-27 heading into the fourth period.