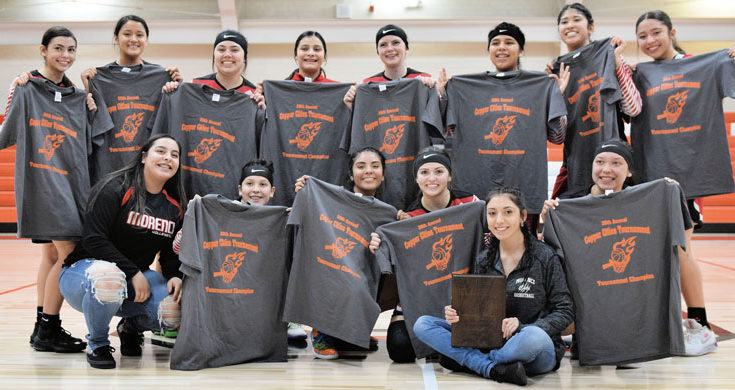 GLOBE – “It’s not how you start, but how you finish that matters.”

Those words were followed throughout the two-day meet by the Greenlee County girls.

Morenci opened the 39th annual Copper Cities Tourney with a loss before setting foot in the gym Jan. 3. The Wildcats missed the game, leaving Morenci for the two-hour drive a half-hour before the scheduled start.

A schedule change went unnoticed by vacationing Morenci athletic director Frank Ogas. As a result, the Wildcats took a forfeit for their initial pool game because of an unread electronic message indicating the change.

Morenci won two pool games, and three bracket games to leave Gila County with the 39th Copper Cities Tourney title Jan. 4. The Wildcats slipped past Douglas 59-58 in overtime. The two finalists both opened the meet with a forfeit.

The sixth seed Wildcats qualified for the tourney finale by upsetting third seed Miami 43-12 in the quarterfinals and second seed Globe 38-31 in the semifinal.

“I told the girls to look for each other (at halftime),” Ortega said.

They did. The Wildcats came back from a 27-19 halftime deficit to tie in regulation and slipped past Douglas in overtime. Morenci outscored the Bulldogs 35-27 in the second half and 5-4 in overtime for the win.

Trailing 51-54 in the closing seconds of regulation, sophomore Zenayah Cortez pulled up and drilled a 3-pointer which dropped through the net with a second left on the clock. Her field goal gave her 32 points, but she was not done yet.

“I saw the clock was winding down,” Cortez said. ”It was do or die.”

Junior Clarissa Jaramillo gave Douglas a 56-54 lead with a lay-up four seconds into the extra period.

“I was nervous,” she admitted.

Silvester calmly shot the first one which rolled around the rim before falling through the net. She drew nothing but net on the second one following a Douglas time out.

Another Douglas time out a second later set up the final strategy.

“I told the girls to match up,” Ortega said. “Don’t make it easy for them. Make them work for it.”

The Wildcats did as they were told. Morenci’s defense found the ball handler yielding the ball to a second option who put up a long-distance airball. Game over.

Trailing 20-23 at halftime, a 6-0 run gave the Wildcats a 26-23 advantage 2:14 into the third quarter. Three field goals, one by Zenayah Cortez and two by Medina, gave the guests the lead for good. An 8-4 effort during the rest of the quarter had Morenci with a 34-27 advantage heading into the final eight minutes. The teams both added four points apiece in the fourth quarter.

Morenci led 22-5 at halftime and returned with a 21-7 second-half outing for its initial bracket play win.

The Wildcats added a 25-15 second-half outing to a 24-2 halftime advantage over the Sabercats in their second pool game played Jan. 3.

None of the Sabercats had double-digit scoring. Olivia Beaver had seven points, Armani Rodriguez three, Mya Begay, Emily Sartin, and Morgan Tompkins two each, and Sammy Phillips one.

In overtime, Morenci had a Zenayah Cortez field goal plus 1-2 free throws by both Medina and Brigid Silvester compared to a Heather Machuse free throw plus 1-2 by Delisha Williams for Cibecue.

Morenci led 21-14 at halftime but Cibecue turned in a 19-12 second-half effort to tie in regulation.