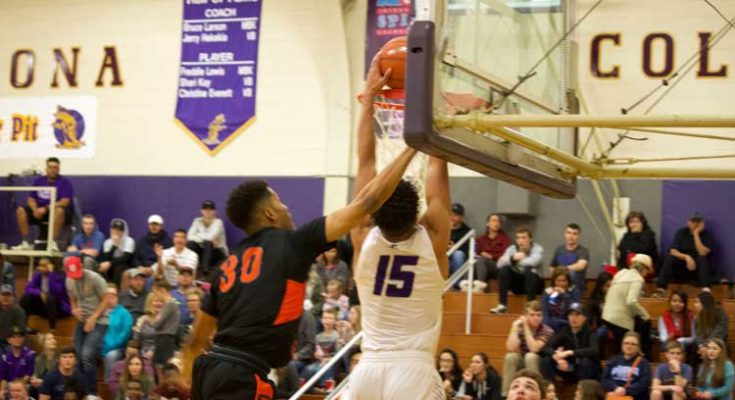 Jon Johnson Photo/Gila Herald: Dyllan Robinson avoids the block attempt and throws one down in the first half. EAC would go on to lose to Chandler-Gilbert, however, 86-74.

THATCHER – The Chandler-Gilbert Community College Coyotes never trailed against the Eastern Arizona College Gila Monsters on Wednesday night and left the gymnasium with the road victory, 86-74.

A 9-0 run in the middle of the first half and an 8-0 run to start the second gave the Coyotes enough space to take the victory.

“If you can get a win on the road you take that and get out of town as quick as you can,” Chandler-Gilbert head coach Steve Silsby said. “I’m proud of my guys; they did a good job.”

The Coyotes were led by 6’11” sophomore center Maurice Walton from Desert Ridge High School, who took up residence in the paint and punished the Monsters for 15 of his team-high 22 points in the first half. Walton was money from down low and helped Chandler open up an early 13-7 lead.

The Coyotes’ frontcourt owned the middle all night as Walton was relieved by 6’11” freshman center Patrick O’Heron from Butte High School and 6’10” freshman forward Will Johnson from Corona Del Sol High School.

It was a well-spread out team effort for the Coyotes, who had five players finish with double figures and the two remaining who scored had 9 points each.

“I thought we played pretty smart,” Silsby said. “We didn’t lose our composure . . . We never gave up the lead. We just kept working and working and made a couple big shots.”

While Walton took up a lot of space, that didn’t deter EAC’s 6’7” forward Dyllan Robinson from attacking. Robinson used his speed and agility to get around his defenders and then used the rim to help thwart off would-be shot blockers as he put up 18 on eight field goals and 2-2 from the free-throw line.

Electric guard Davon Bolton led the Monsters with 26 points by hitting six 3-pointers to go with three regular field goals and 2-2 from the line.

The Monsters kept coming back all night long and lowered the Coyotes’ lead to just 1 point, 16-15, about midway through the first half. The Coyotes then went on a  9-0 run, however, and soon had a double-digit lead, 27-17.

Again the Monsters came back and got within 3, 35-32. Despite only shooting 37 percent from the field in the first half and 3-8 from the foul line, the Monsters went into the locker room down only 5 at the half, 37-32.

EAC head coach Maurice Leitzke said it simply came down to his team not making shots while Chandler did.

With Walton and the other big men clogging up the lane, offensive rebounds were hard to come by for the Monsters, and most of their missed shots were one and done.

“They’re a tough team to offensive rebound on,” Leitzke said. “They’re the biggest team in the league. That’s what their strength is.”

The Coyotes also got some help from its outside game, hitting seven 3-pointers on the night, and at one point in the second half hit three in a row to go up 67-51 with 8:23 to play.

“They got hot there in that stretch and made those 3’s in a row by three different guys,” Leitzke said. “That shot-clock 3 there from about 25 feet was a backbreaker.”

The lead would eventually swell to 74-57 with 3:56 left in the game. That’s when EAC began to use full-court pressure, but Chandler easily defeated it.

Still, the Monsters fought back and dropped the deficit to single digits, 80-71 with 31.3 seconds to play. But Chandler hit their free throws down the stretch and left victorious, 86-74.

EAC will travel to take on Central Arizona on Saturday, Feb. 24, and then will finish up its regular season at home against Glendale on Tuesday, Feb. 27, at 7:30 p.m.