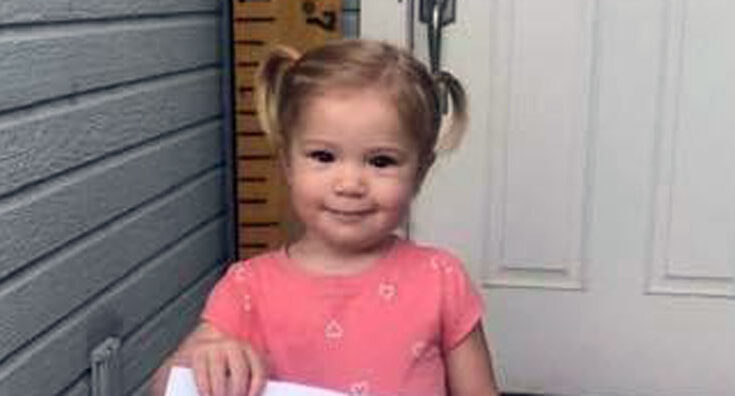 Contributed Photo: The body of 4-year-old flood victim Maci Reed was recovered Monday morning after being missing since Thursday.

PIMA – After an extensive four-day search, the body of Maci Reed, 4, of Central, has been recovered.

Maci was found Monday morning around 7:30 a.m. by volunteer searchers in the Gila River between Pima and Eden, according to Pima Police Chief Diane Cauthen.

Maci was found near the Eden diversion dam about a half-mile from the Eden Bridge. The area is roughly two miles from where she first entered the water in Cottonwood Wash.

“We did find her right where Markham Wash meets the river in Eden,” one of the searchers who found Maci told the Gila Herald. “(My wife) and many others were fasting and praying and we did feel like we were led to her.”

Maci had been missing since the evening of Thursday, July 22, when she was swept away by floodwaters from Cottonwood Wash when the suburban she and her family were in attempted to cross the wash about a half-mile south of the Cottonwood Wash Bridge.

“Thank you (for) the outpouring of support from the community and governmental agencies,” Pima Police Chief Diane Cauthen said in a press release. “Without this support, we would not have been able to locate Maci in this short amount of time. Unfortunately, Maci did not survive the incident. Our condolences go to the family.”

Authorities initially received a 911 call on Thursday, July 22, at about 9:22 p.m. from a woman who advised that she and her family were on top of their suburban and that it was being swept away by floodwaters in Cottonwood Wash. The family had reportedly crossed the wash earlier, and upon attempting to cross back the vehicle stalled. The family included both parents and two male and two female children.

First responders managed to rescue the family, but Maci was lost to the floodwaters. An immediate search was conducted by various local police and volunteers but the weather and lighting hampered the results.

The community gathered in mass the following morning and each day since then as a large contingent of volunteers took to the search utilizing whatever means they could to look for the missing girl. A group that had been searching for Maci in a pontoon boat had to be assisted by Graham County SAR to get out of the water near the Pima Diversion Dam, according to authorities.

Pima Town Manager Sean Lewis praised the search effort and lauded all the various law enforcement resources that were involved, the community support from all the volunteer searchers, and all of the businesses and individuals who donated food, water, and other items. He said it was the cooperation of all who made finding Maci so quickly possible.