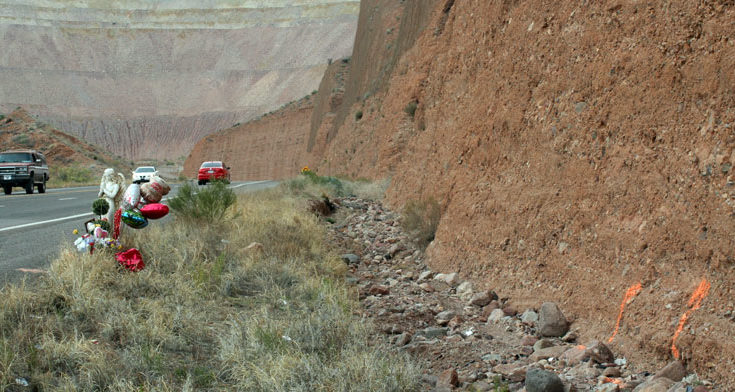 Walt Mares Photo/Gila Herald: Traffic passes by a memorial on U.S. Highway 191 where the fatal shooting of Matthew Gerald Misener occurred. He was murdered while traveling to the Morenci copper mine where he worked. The shooting occurred Feb. 10. The road leads to the sharp turn in the road known as the “Horseshoe Curve.” Orange striping, at lower right, at the bottom of a caliche cliff marks where Matthew Misener’s vehicle came to rest.

CLIFTON – They are not all that uncommon. There are often crosses placed along the side of a highway mark where some tragedy occurred. The crosses, or other such markers, are placed where a life has been lost, usually because of a vehicle crash.

Some are plain crosses while others are decorated. Some are simply stuck into the ground or are supported by a pile of rocks. That is not at all the case of what happened here in Greenlee County.

There was a quite different and elaborate memorial along U.S. Highway 191 between Clifton and Morenci.

It was the statue of an angel with big wings. It was marble-white and about three feet high. Attached to it were several different bright-colored balloons. Their messages varied from “I love you” to words regarding the upcoming Feb. 14 Valentine’s Day.

Those messages were incredibly optimistic and spoke of deep, heartfelt love – no matter what.  That is because the person for whom the messages were meant for was someone who was no longer in this world.

The memorial was placed along the highway on Feb. 12. That was two days after Matthew Gerald Misener was murdered. It was in the early morning hours of Monday, Feb. 10. The dastardly deed was done as he was driving to work at the Morenci copper mine.

Indeed it was a dastardly, unspeakable crime. Matthew had children. He was young, only 35, and had much to look forward to in life.

Why did it happen? That is what Clifton police are investigating. Two people, one of which is the alleged shooter, are in police custody. And the investigation continues to find the nuts and bolt of the truth of why the young man was so brutally and shockingly killed.

Along with Matthew’s family and friends, his murder was also shocking to the Greenlee County community. There have been some killings in Greenlee  – though not very many – during the past four decades. None have been as stunning and horrendous to the entire community as was Matthew’s death.

Immediately after the murder, rumors were rampant about what actually happened. That was because police were, as they should be, initially tight-lipped as they began their investigation.  And it continues. There are so many questions to be answered and Clifton police are diligently working on finding out everything involving the crime.

There have been many vehicles bearing mourners, or perhaps the morbidly curious, who have stopped at the memorial site where the murder occurred. On one occasion there were four vehicles that pulled up. The vehicles carried some elderly and very young folks. They all looked quite solemn. A couple of the younger ones, probably high school kids, were in the rock-filled ditch between the highway and a caliche cliff. It was where Matthew’s vehicle ended up when he was shot.

The youngsters appeared to be searching for something among the debris of the wreckage where the vehicle struck the cliff.  Perhaps they were seeking small bits of something to take with them as a memento. However, there was very little debris other than small bits of shattered windshield glass and small pieces of a plastic headlight casing.

The people left, looking every bit as solemn as when they arrived.

The memorial has been removed from the death site. It was there for only a week. Why it is gone is not known. Perhaps the family had it removed or the state highway department had it removed.

While the winged angels and balloons are gone there remains a memorial of sorts marking where it all happened. There are two vertical orange stripes, painted by police, on the cliff bottom where Matthew’s vehicle came to rest.

The wind, rain, and sun will eventually cause them to disappear. But that will probably take a long time. Meanwhile, there remains a reminder of where Matthew Gerald Misener died. What also remains is finding the absolute truth about why he had to die and prosecuting those responsible for his death.