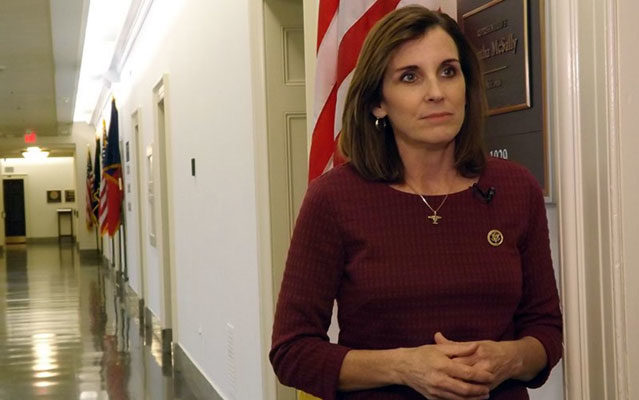 Photo By Madison Alder/Cronkite News: Sen. Martha McSally, R-Arizona, here in a 2016 file photo, told a Senate Armed Services hearing on military sexual assaults Wednesday that she was “preyed upon and raped” by a superior officer while serving in the Air Force.

WASHINGTON D.C. – Sen. Martha McSally, R-Arizona, revealed Wednesday that she was raped by a superior officer while in the Air Force but was too “ashamed and confused” to report it at the time.

McSally, at a Senate Armed Services subcommittee hearing on sexual assault in the military, praised the victims who came to testify but said she did not come forward immediately to report her rape because she “didn’t trust the system at the time” to handle it.

When she did try to share it years later, she said, she was “horrified” at the way her attempts to “generally share my experience were handled” by the Air Force.

“Like many victims, I felt the system was raping me all over again,” McSally said, pausing briefly to collect herself while reading from a prepared statement.

“But I didn’t quit,” she said. “I decided to stay and continue to serve and fight and lead, to be a voice from within the ranks for women and then in the House and now the Senate.”

Sexual assault groups and other members of the Senate praised McSally for her bravery in coming forward with her “deeply personal” six-minute statement.

“I am in awe of the bravery shown today by the survivors who are testifying before the Senate and from my colleague, Sen. McSally,” said Sen. Tammy Duckworth, D-Illinois, in a statement after the hearing.

A spokeswoman for the Arizona Coalition to End Sexual and Domestic Violence called McSally “very brave” and expressed hope that her willingness to come forward can help other survivors.

“When someone who has social or political power comes forward, it encourages survivors with similar experiences to speak up,” said Lindsay Ashworth, sexual violence response manager for the coalition.

In a statement from the Air Force, Capt. Carrie Volpe said the actions McSally described “violate every part of what it means to be an Airman.”

“We are appalled and deeply sorry for what Sen. McSally experienced and we stand behind her and all victims of sexual assault,” Volpe’s statement said. “We are steadfast in our commitment to eliminate this reprehensible behavior and breach of trust in our ranks.”

The remarks came during a subcommittee hearing on sexual assault in the armed services, a problem that Sen. Kirsten Gillibrand, D-New York, said “is still pervasive” after years of trying to deal with the problem.

“The military is not attacking the problem with any of the focus or intensity that it would with any other problem,” said Gillibrand, who added that there is a “very alarming rate of retaliation by those in command against victims of sexual assault.”

Gillibrand preferred solution would take investigation of sexual assault claims out of the military chain of command and turn them over to independent investigators.

But McSally, calling on her own experience as a combat pilot and squadron commander, said that taking the issue out of the hands of military commanders is the wrong solution.

“We must allow, we must demand that commanders stay at the center of the solution, and live up to the moral and legal responsibilities that come with being a commander,” she said.

McSally said commanders need to be properly trained to recognize and fairly prosecute sexual assault in the ranks, but if the commander “is the problem … they must be removed and be held harshly accountable.” She rejected suggestions that it was a choice between victims and the chain of command.

Duckworth, who is also a combat veteran, said she will “push for meaningful reforms.” That means not only prosecuting wrongdoers, she said, but ensuring the survivors “have what they need to heal and be able to resume the careers they dreamt about from the time they entered the military.”

The hearing featured military assault victims and their advocates as well as lawyers representing the Army, Navy, Air Force and Marines.

In his prepared testimony, retired Air Force Col. Don Christensen, the president of Protect Our Defenders, said the number of reported sexual assaults in the military has ranged from 26,000 in 2012 to 15,000 in 2016. But he said the rate of assaults on military women over that period has remained virtually unchanged at 4.4 to 4.3 percent.

Wednesday was not the first time McSally has talked about being a victim of assault. While running for office last year, she told the Wall Street Journal she had been sexually abused by a coach in high school. She told the witnesses at Wednesday’s hearing that, “We are survivors together.”

“I am honored to be here and use my voice and unique experience to work on this mission to stop military sexual assault for good,” she said.

The Southern Arizona Center Against Sexual Assault praised McSally for her “courageous action.”

“Her words of fear and betrayal ring true for many survivors we work with,” said a statement from the center. “Her personal, professional and political advocacy gives a loud voice to thousands of survivors and is hopefully one that can influence policy for individuals going forward.”